Researchers in Japan have observed the stable hemi-bonded structure of (H2S)n+ (n = 3–6). Using infra-red (IR) spectroscopy, the team has experimental evidence for this unusual, previously only theoretically predicted, structure.

The two-centre three-electron (2c–3e) bond, also known as a hemi bond, was first proposed by Linus Pauling in the 1930s. It is formed by the lone pair orbitals of a neutral molecule and its radical cation overlapping, causing the bonding sigma orbital to be doubly occupied and the antibonding sigma* orbital to be singly occupied.

In dimeric radical cations with lone pairs, such as protonated water, the proton-transferred structure (H3X+–XH) dominates, meaning that the 2c–3e bond has remained experimentally elusive until now. Inspired by analogues of protonated water, the team led by Asuka Fujii at Tohoku University decided to investigate protonated H+(H2S)n clusters. Recent theoretical work had predicted the higher stability of (H2S)n+ with a 2c–3e bond (H2S∴SH2)+ over H3S+–SH, with the unusual bond 50–100kJ mol–1 stronger than the ionic interaction. 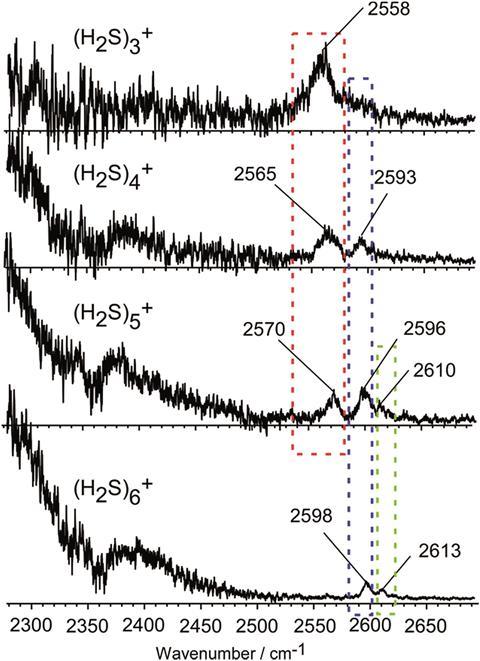 After overcoming the problems of the low ionisation efficiency of (H2S)2+ and the low IR absorption intensity of the SH stretching vibrations, the team measured the IR spectra of (H2S)n+ (n = 3–6) in the gas phase for the SH stretch region (2300–2700cm–1). If the ion core in the molecule is the proton-transferred type, the free SH stretch band in the core would disappear at n = 4, however this band remains until n = 6, confirming that the ion core is of the hemi-bonded (2c–3e) type. The bond is stable to solvation (hydrogen bond formation), at least up to the completion of the first solvation shell.

Christopher Hendon, an expert in computational physical chemistry from the Massachusetts Institute of Technology, US, calls this a triumph of spectroscopy. ‘Direct observation of a 3e–2c bond cements their existence beyond theoretical prediction.’ And Sanjay Wategaonkar, an expert in bonds and interactions from the Tata Institute of Fundamental Research in India, agrees: ‘This is excellent work that discriminates the hemi-bonded structure from the hydrogen-bonded structure.’

Next, Fujii plans to investigate (H2S)2+ – the minimum-sized cluster with the 2c–3e bond. ‘We have not yet succeeded to measure its spectrum because of the restriction of the spectroscopic technique we employed. We plan to challenge (H2S)2+ with an updated technique,’ he adds.