Knotted molecules can transfer chirality from the nano to the macroscale 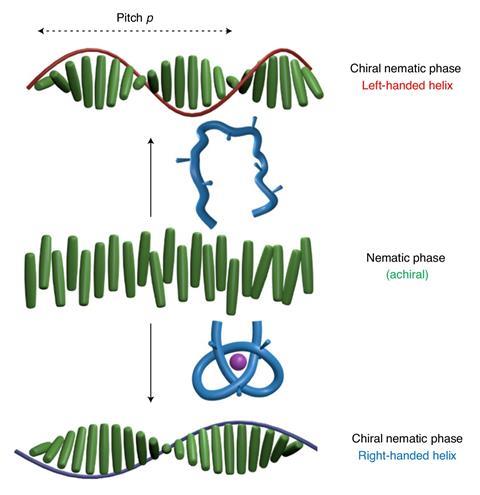 Knots are common in long molecules such as proteins and DNA, but both the method by which they form and the mechanism by which they effect a molecule’s macroscopic function remains unclear. Now, researchers from the Netherlands and the UK have shown that the chirality of liquid crystals can be inverted by unknotting a molecule that has been added to it. This provides a far less energetically-expensive means of inverting chirality than methods developed previously, and demonstrates that nanoscale knotting can have macroscopic effects.

Chirality is widespread in nature, from the folding of proteins to the shapes of the tendrils of plants. Many systems can be found in both forms, suggesting a molecular mechanism for switching between them, but the forces that allow this are poorly understood. ‘Inverting handedness in ordered soft matter such as liquid crystals normally requires energetically very demanding chemical transformations,’ explains Nathalie Katsonis of University of Groningen in the Netherlands, an expert in supramolecular chemistry. ‘Typically you need to make or break covalent bonds.’

Katsonis and colleagues, together with researchers at the University of Manchester led by David Leigh, here demonstrate a subtler approach in nematic liquid crystals. In the absence of any external influence, the crystals all align in the same direction. ‘They are very sensitive to chirality,’ explains Katsonis. ‘When you put 1% by weight of a chiral molecule in they will form a helix.’ Of many possible ‘chiral dopants’, one is the tris(2,6-pyridinedicarboxamide) molecule. What made the tris(2,6-pyridinedicarboxamide) uniquely interesting to the researchers was that, in 2016, Leigh’s group had demonstrated that, in the presence of lutetium(III) ions, the three 2,6-pyridinedicarboxamide ligands would all co-ordinate with the metal centre, causing these long, shoelace-like molecules to literally tie themselves into knots.

Katsonis stresses that there are ‘many differences’ between the liquid crystal system and a natural system and that she ‘wouldn’t generalise’. However, she says: ‘Until now, a lot of people have been working on topological molecules, such as Leigh and [Nobel laureates] Fraser Stoddart and Jean-Pierre Sauvage … but it was always remaining at the molecular level. I think with this work we saw a way of transferring the information carried by the knot to larger length scales, and that means to functionality.’

‘It’s a very nice paper,’ says Ivan Smalyukh of the University of Colorado in Boulder. ‘In the past people would study molecular knots by exercising their organic chemistry synthesis skills and making all kinds of knots and links and other elaborate structures. In a different domain – in colloids – people have been producing knotted structures with colloidal objects on the scales of micrometres, tens of micrometres, and even centimetres as well. This work looks at how you transfer that chirality from the scale of individual, small organic molecules to macroscopic scales,’ he adds. ‘I think this work does open quite a few doors to new worlds.’