Researchers from Korea and Japan have put a new twist on aromaticity, synthesising the largest Möbius aromatic molecule to date. 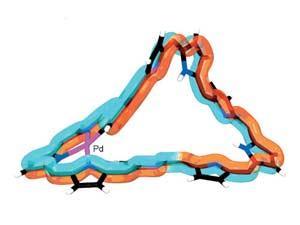 The molecule's π-orbitals are twisted like a MÃ¶bius strip

Like Möbius strips, Möbius aromatic molecules have a half-twist in their structure. The phenomenon was theoretically predicted in 1964 for rings large enough to undergo such a twist – around 20 atoms. However, such large, flexible rings are difficult to synthesise, and are likely to untwist, so the first stable Möbius aromatic molecule wasn’t made until 2003.

The group is now exploring the synthesis of even larger porphyrins to study their chemical behaviour, and their optical and redox properties.