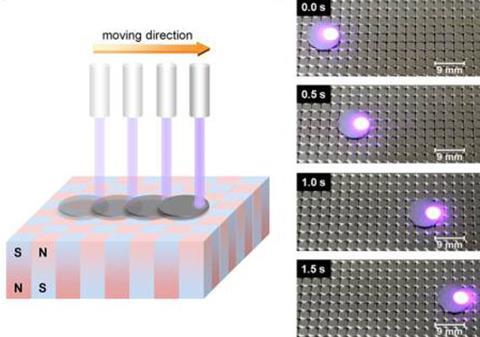 A graphite disk levitating over a bed of rare earth permanent magnets can be ‘pushed’ around or made to spin using a laser beam, Japanese scientists have shown. The phenomenon can also be used to convert sunlight into movement, offering a possible alternative way to harness solar energy.

Graphite is a strongly diamagnetic material, so it can be levitated in the relatively weak magnetic fields of permanent NdFeB magnets, rather than superconducting electromagnets. Jiro Abe and his team at Aoyama Gakuin University in Kanagawa were trying to develop photochromic compounds that would affect the magnetic properties – and hence the height – of a levitating sheet of graphite when illuminated. ‘In the course of the experiments,’ Abe says, ‘we happened to find that the magnetic susceptibility of the graphite itself could be changed upon light irradiation.’

When the team placed a 1cm diameter disk of pyrolytic graphite – cut from a commercially available sheet using scissors – over an array of button-type magnets and shone a laser on it, they found that they could push it around. Similarly, if they levitated the disk over a single stack of magnets and shone the laser near the edge, the disk began to spin.

Abe attributes this movement to the laser heating up the graphite, which affects its magnetic susceptibility, making it tilt and hence move. ‘Graphite has excellent photothermal properties,’ he says. ‘Upon light irradiation, the temperature of graphite increases instantly.’ However, it also releases heat very rapidly as well, which is why it is used as a heat sink for many electronic devices. This, says Abe, is what allows the movement of the disk to be controlled so responsively.

The disk could also be spun using sunlight focused at its edge, reaching a speed of around 200rpm. Abe suggests that this might lead to a new way of harvesting solar energy, if the movement could somehow be harnessed to do useful work. ‘To make something like a levitable graphite turbine blade is not an easy task, but it is not impossible,’ he says.

Ted Forgan from the University of Birmingham, UK, describes the work as ‘a fascinating phenomenon’, but is sceptical that a device built on this principle would be efficient enough to be practical. ‘The mechanical work produced in terms of kinetic energy of motion or rotation is much smaller than the heat input by the laser or sunlight,’ he says. ‘Any efficient heat engine requires the work output to be comparable with the heat input, otherwise too much heat energy is wasted in heating and cooling the working substance.’