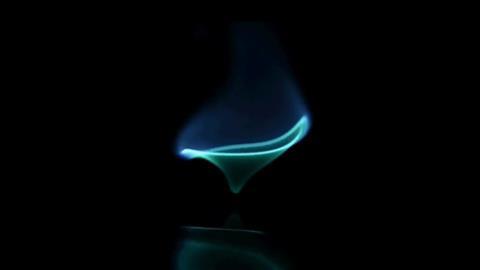 Researchers have revealed how burning fuel can form a blue whirl, a ghostly ring-shaped flame that unlike regular fire vortices produces almost no sound nor soot. The work could potentially allow more efficient combustion of mixed hydrocarbons from oil spills.

Fire whirls occur when the intense heat rising from a fire creates a tornado-like vortex that sucks in oxygen and flammable material from the surroundings, creating a plume of high-temperature flame that can reach kilometres into the air. ‘They have a lot stronger suction than normal fires and much higher burning rates, and all of this results in something that’s much more dangerous,’ explains aerospace engineer Joseph Chung of University of Maryland, US. A fire whirl ignited by the 1923 Great Kantō earthquake in Japan killed 38,000 people in 15 minutes. 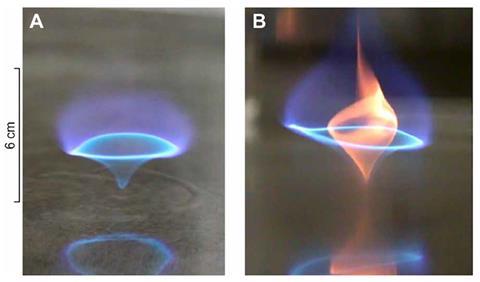 Source: © H Xiao/University of Science and Technology of China

In 2016, University of Maryland researchers led by Elaine Oran were investigating whether fire whirls’ high burning efficiency could be useful for cleaning oil spills, which are often ignited. While studying fire whirls on water in the laboratory, they found that the turbulent, noisy fire whirls could spontaneously transform into blue–violet, torch-shaped auras hovering just above the water. ‘They had no idea what they were looking at,’ explains Chung.

Now, Oran and a team led by Chung explain the blue whirl as the combination of three different flame types. At sufficiently high spinning speed, the single, turbulent vortex becomes unstable and collapses. In its place, four separate vortex flames form: the torch handle, in which fuel and oxidiser are premixed; a lean premixed flame creating the halo around the upper torch; and the torch flame itself, which is a diffusion flame formed when fuel and oxidiser are separate until the point of combustion. The brightest part of the whirl – the levitating ring – is a triple flame formed when these three types of flames meet. ‘All of these structures have vorticity in them but it’s not as violent as the original fire whirl,’ explains Chung’s colleague Xiao Zhang. 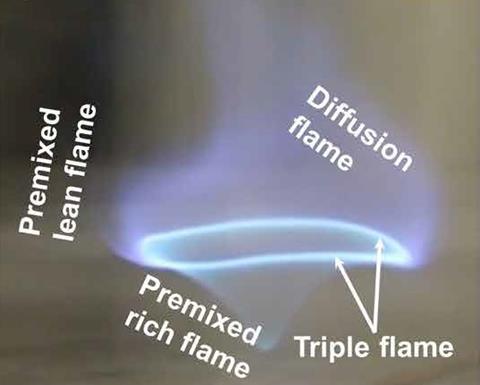 Source: © H Xiao/University of Science and Technology of China

The blue whirl is made up of four different flame types

‘Fossil fuels will still be around for a few decades or so,’ says Chung, ‘One of the benefits that the blue whirl provides is that it could potentially burn many different types of fuels cleanly with just one configuration.’ Before this is possible, however, the researchers must understand better whether and how the phenomenon can be safely scaled up.

‘What they calculate, they calculate right,’ says Forman Williams who researches flame theory and combustion at the University of California San Diego in the US. ‘But there’s still plenty to be done in understanding the structure of the blue whirl. These things are far from practical application but there are situations in which they sometimes turn out to be helpful, in this case for cleaning oil spills in an efficient and less polluting way.’