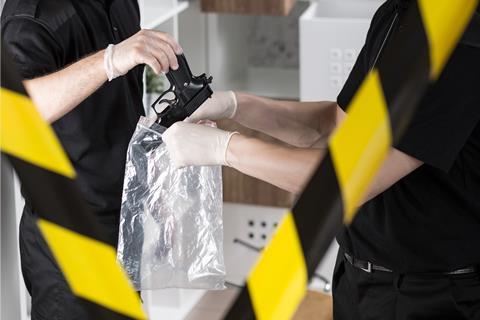 A model of the complex chemistry that happens when shooting a gun can predict components in the ammunition from gunshot residues. The machine-learning method could bypass bottlenecks in current forensic procedures.

In the past, gunshot residue analysis has largely relied upon firing ammunition, often seized from a suspect, using a suspect firearm to produce reference residues that forensic scientists compare to crime scene samples. However, this is time-consuming, relies upon the ammunition and firearm being available, and is tricky to do before arresting a suspect or if ammunition is missing or passed through a target.

To overcome these limitations, a team led by Matteo Gallidabino from Northumbria University has been studying machine learning, a sub-field of artificial learning that unpicks the complex relationships between data. They have developed a method that predicts the ammunition used in a firearm without requiring a reference sample prepared from a suspect weapon and ammunition.

‘The method we report is basically a totally new approach to forensic profiling, especially of those traces that conserve little characteristics of their source materials during their formation and transfer procedures,’ explains Gallidabino. ‘We report the use of this approach mainly as a support to crime reconstruction and investigation, and to establish rapid links between gunshot residues and ammunition types. This may be a game-changing tool in those cases where multiple firearms or ammunition types were used.’

To develop their qualitative profile–profile relationship (QPPR) modelling technique, they prepared a number of organic gunshot residue samples using nine types of ammunition and tested both the starting sample and the resulting gunshot residue using gas chromatography. They then used this data to test 14 machine-learning techniques and obtain an optimised model that predicts what the profiles of the smokeless powders, used as propellants in the firearms, would have looked like prior to firing based on the profile of the organic gunshot residue after discharge.

Gallidabino’s team are continuing to investigate the broader application of their QPPR modelling and are looking to expand its capabilities, including to the analysis of other complex trace materials, such as explosives or accelerants. ‘My final aim is to develop an integrated and universal, easy-to-use software solution to support the analysis and profiling of a broad range of different materials commonly found in forensic science to help forensic practitioners across different disciplines approach source-level problems.’

Jason Birkett, who works in the chemical ballistics research group at Liverpool John Moores University, UK, says the study has ‘great potential in linking evidence based on organic gunshot residue profiles – it is an exciting development.’ He believes the method could reach beyond forensic science: ‘I can see this being applied to other areas where comparison of chemical traces is required. There are countless possibilities.’