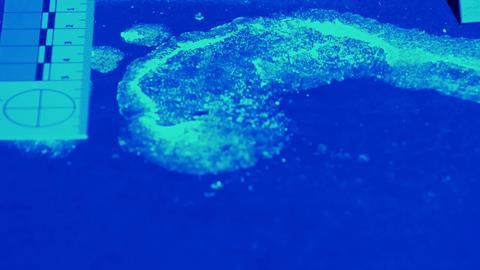 An antimalarial drug and a smartphone could soon be added to the tool bag of crime scene investigators searching for tell-tale bloodstains. Chinese researchers have discovered that combining the drug with the chemical used by crime scene investigators to reveal bloodstains increases the test’s sensitivity by several orders of magnitude enabling even trace amounts of blood to be revealed.

Guobao Xu at the Changchun Institute of Applied Chemistry, Chinese Academy of Sciences and colleagues knew that the antimalarial artemisinin, derived from sweet wormwood (Artemisia annua), is a natural peroxide. They reasoned that the compound might, therefore, be used as a more subtle trigger for the forensic luminol chemiluminescence test for latent bloodstains.

Usually, a forensic scientist will spray an alkaline solution containing luminol (5-amino-2,3-dihydrophthalazine-1,4-dione) and hydrogen peroxide or sodium perborate on to an area of fabric, flooring or other surface suspected of having blood spatter from a crime. The iron from the haemoglobin in blood catalyses the reaction of luminol with the peroxide to produce a bluish glow, indicating sites where blood is present. Forensic investigators could then use a digital camera without flash to photograph the latent bloodstains revealed.

Xu and colleagues point out that both peroxide and perborate degrade with low specificity. The presence of other common ions can trigger the reaction at a crime scene even if blood is not present. The team has now demonstrated that artemisinin is a much more fussy peroxide. It does not undergo degradation with other common ions present and only reacts in the presence of blood. The team has verified that this method can distinguish blood from coffee, brown sugar and other stains – something that luminol can struggle with. 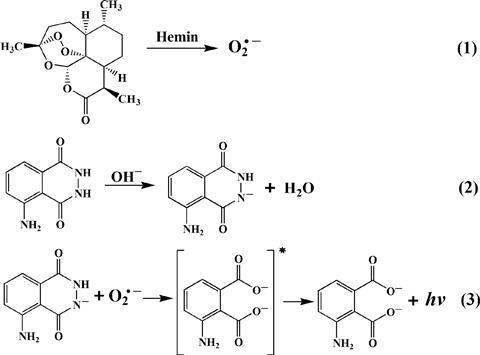 Moreover, the luminol–artemisinin chemiluminescence test is extremely sensitive and can detect a bloodstain even if a perpetrator or accomplice has attempted to wash it away. In fact, even if the stain is 100,000 times as dilute as it was originally the new test can still reveal its presence. The researchers then turned to the smartphone as their tool of choice for capturing an image of the resulting luminol glow. The team points out that a smartphone or digital camera with a long exposure setting allows them to capture the glow of activated luminol in a darkened room against an otherwise dark background.

‘The original idea of the authors to replace the commonly used hydrogen peroxide with the stable organic peroxide artemisinin offers undoubted advantages in term of selectivity, robustness and increased detectability,’ says Aldo Roda of the University of Bologna, Italy. ‘The efficient chemiluminescent reaction allow them to use a smartphone with its sensitivity and instrumental simplicity, which could be easily applied in forensic chemistry and even in more general applications.’