Scientists in the UK and the Netherlands have revealed a rapid, single-fingerprint test for cocaine use. The procedure is less invasive, more hygienic and faster than established approaches, which typically test blood, urine or saliva. Portable versions could be available to law enforcement agencies within the next decade. 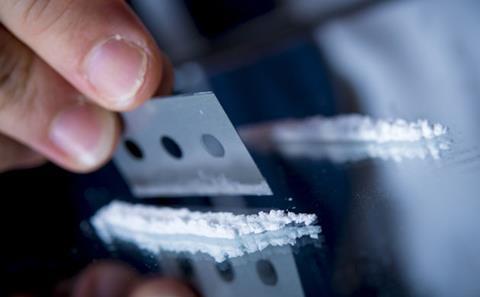 The method could find use in drug rehabilitation centres, workplace tests and initiatives to test motorists for drug driving

Have you recently taken an illicit drug? You have the right to remain silent, but if authorities really need an answer, there’s a global testing industry worth several billion dollars on hand to help, with an array of analytical techniques. Potentially adding to this arsenal, a team of scientists led by Melanie Bailey at the University of Surrey have now demonstrated a formidable test for cocaine – don’t sweat, it only needs one fingerprint.

The test – brainchild of Marcel de Puit at the Netherlands Forensic Institute – is based on surface mass spectrometry. It desorbs molecules from fingerprints and detects not only cocaine but also its two metabolites, benzoylecgonine and methylecgonine, showing that the drug has been ingested, rather than only touched.

However, the test’s distinction between drug use and mere contact is by no means its only advantage.

‘A fingerprint is a very quick way of depositing a sample, compared with other collection regimes,’ says Bailey. Although chromatographic tests on fingerprints have previously detected drug metabolites, such approaches require sample pre-treatment, slowing analysis. By contrast, surface mass spectrometry allows rapid, in situ testing. ‘Our analysis takes just a few minutes per sample’, Bailey continues. ‘This opens up a really exciting possibility of testing for drug use very quickly.’

In addition, the test is minimally destructive and only analyses a very small area, 100µm in diameter, allowing repeated testing on the same fingerprint.

‘It’s also very difficult to falsify and could help with the sample’s chain of custody,’ Bailey adds, ‘because the subject’s identity is embedded in the ridge detail of the fingerprint’.

So far, the test has only detected cocaine use qualitatively, during a correlative comparison with the results of conventional saliva tests. The team now aims to develop quantitative measurements, which might not only paint a detailed picture of a person’s drug habits but also identify the particular batch of cocaine that they took.

However, ‘quantifying substances in fingerprints is very challenging’, explains Bailey. ‘A fingerprint is not stable as a function of time and, unlike blood or urine, you don’t know how much sample has been deposited.’

Bailey also notes that ‘we’re quite a long way from analysing fingermarks at crime scenes; it’s still quite challenging to detect illicit substances in a fingerprint that has been deposited under controlled conditions.’

Spectroscopist Meez Islam, from Teesside University, UK, concludes that ‘the next generation of [cheaper and more portable] mass spectrometry instruments could be used for the detection of drugs of abuse in the custody suite or even at the roadside.’ Bailey forecasts that portable versions of the test could be available within the next decade.