Software that labels chiral centres on scanning probe microscopy (SPM) images of molecules has been developed by scientists in Singapore.

Knowing the chirality of molecules is fundamental for many applications including heterogeneous catalysis, chiral separation, drug development and anything that relies on surface recognition. Manually determining chirality from SPM images can take up to a few days for complex systems, making an automated system desirable.

Now, scientists from an artificial intelligence group and an atomic imaging group at the National University of Singapore have collaborated to create a machine-learning algorithm that does just that. They tested it on two densely packed supramolecular assemblies, consisting of hexadimethylphenylbenzene and fluorine-substituted hexadimethylphenylbenzene units, and found it accurately identified chiral centres in just a few hours.

SPM image analysis currently ‘relies on the ability of the human to analyse, classify and interpret ultimately fine variation of the STM contrast at the nanoscale’ and is therefore time-consuming and prone to errors, explains Jiong Lu who leads the atomic imaging group. Because of this, using machine learning to automatically recognise chiral centres would be beneficial. 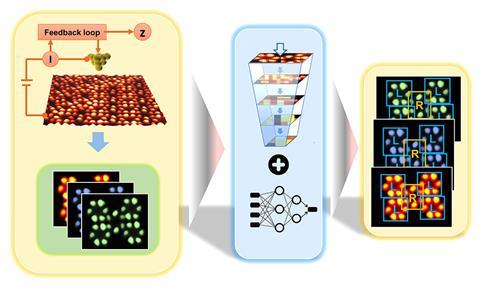 Leading the artificial intelligence group, Xiaonan Wang says the framework showed ‘exceptional performance, even on non-ideal images containing imperfection features … with a limited amount of training data’, so indicates the model is robust. Several experienced SPM users cross-checked the performance of this model by manually labelling the tested molecules as well. And there is potential to incorporate the system into current STM software, making it convenient to use.

SPM is a commonly used technique for analysing nanostructures. Magalí Lingenfelder, who leads the Max Planck–EPFL laboratory for molecular nanoscience in Lausanne, Switzerland, has been using SPM for decades and comments that ‘it comes as no surprise that machine learning can have tremendous impact in automated image analysis.’ However, Lingenfelder does caution that ‘machine learning for SPM analysis is still at its infancy … I will still be trusting my eyes over any algorithm for a while,’ but will happily embrace it once the technology improves.

‘If the molecule is prochiral as in this study, assignments are even more difficult to make,’ says Lingenfelder. So, using algorithms to detect chirality or molecular conformations in complex systems, especially in prochiral systems, could have a huge impact. ‘The revolution is coming,’ adds Lingenfelder. ‘We should welcome it, it is meant to simplify our work.’

Lu and Wang hope this research will progress to a model that applies to a variety of molecular systems and is more general. They now aim to combine different machine learning systems into SPM instruments to perform other labour-intensive tasks that could accelerate the material discovery workflow.