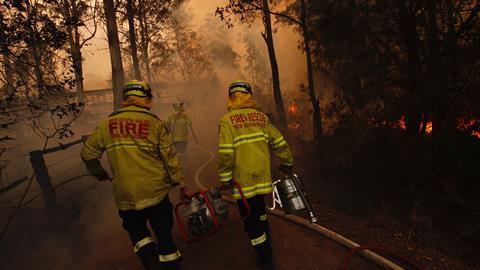 Smoke from immense wildfires, which are projected to become more frequent because of climate change, can reach high into the upper atmosphere and damage the ozone layer, according to a new study. The researchers say the massive pillars of smoke above the huge wildfires in Australia in late 2019 and early 2020 – what’s called the ‘Black Summer’ – injected over 1 million tonnes of smoke particles as high as 35km into the atmosphere, and caused chemical reactions that set back the recovery of stratospheric ozone by about 10 years.

‘This event essentially cancelled out a decade’s worth of recovery,’ says atmospheric chemist Susan Solomon of the Massachusetts Institute of Technology and the lead author of the study.1 ‘It only lasted six to eight months, but what if they happen more often?’

The Australian wildfires in the southern summer of 2019 and 2020 were some of the worst on record. It’s estimated that they burnt more than 240,000km2 of bush over six months and directly and indirectly resulted in more than 400 deaths, while their towering clouds of smoke – called pyrocumulonimbus – measured more than 1000km across and stayed intact for several months.2

Solomon and her colleagues observed the chemical effects of the smoke clouds on the stratosphere in mid-latitudes in data from three orbiting scientific instruments. Each showed the smoke particles caused a sharp drop in the amount of nitrogen dioxide in the stratosphere – a cold and very dry layer of the upper atmosphere, typically between 10km and 50km above the Earth’s surface – which is the first step of a chemical cascade that results in ozone depletion.

Solomon likens the effect of smoke particles to the ash particles in volcanic plumes, which gather moisture on their surfaces that then react with other chemicals circulating in the stratosphere, including dinitrogen pentoxide, to form nitric acid.

Under normal conditions, dinitrogen pentoxide in the stratosphere helps keep chlorine-based chemicals in check, with photochemical reactions resulting in other nitrogen compounds, including nitrogen dioxide, that bind to them. But when the particles from volcanic plumes – or the particles from wildfire smoke – convert dinitrogen pentoxide into nitric acid, a reduction in nitrogen dioxide is observed and any excess chlorine compounds morph into ozone-destroying chlorine monoxide.

The researchers calculate that the smoke from the Black Summer wildfires caused a depletion of about 1% of the ozone layer in the Earth’s mid-latitudes. That’s about as much as the layer’s estimated recovery rate over 10 years, mainly thanks to the international ban on chlorofluorocarbons – which break down into chlorine radicals in the stratosphere under ultraviolet light – implemented since the Montréal Protocol in 1987.

And Solomon warns that the true chemical effects of wildfire smoke particles may be even worse than those of volcanic plumes, because they contain organic substances like ethanol, methanol and acetone that tend to be more chemically active. ‘What’s concerning to me is that it’s clear this [ozone-depleting] reaction is happening,’ she says. ‘But what isn’t clear is what else might be going on? That probably makes it even worse.’

Climate scientist Andrea Steiner, the director of the Wegener Center for Climate Global Change at the University of Graz in Austria, calls the research highly significant. ‘This demonstrates that ozone depletion from wildfires can be similar to that of a volcanic eruption,’ she says. ‘It is a strong finding that the amount of ozone destruction is of the order of recent ozone recovery, thus potentially slowing down the ozone layer’s recovery.’

A 2021 study co-authored by Steiner found the Black Summer wildfires also had a severe impact on the temperatures in the stratosphere.3 ‘Current climate change increases the risk of heat extremes, which might lead to more frequent wildfire events,’ she says. ‘These studies are important steps towards an improved understanding of the future impact of these changes.’