Time for mechanochemistry to grow up

How do you get your reactions going? Light? Heat? Electricity? Grinding? Remarkably, option four is cropping up more and more often − you can read about a very recent example here. It’s nearly 100 years since the term mechanochemistry first appeared in a chemistry textbook, that being Wilhelm Ostwald’s Handbuch der allgemeinen Chemie. And its origins stretch back much further. Yet it feels like a branch of chemistry still in its infancy. 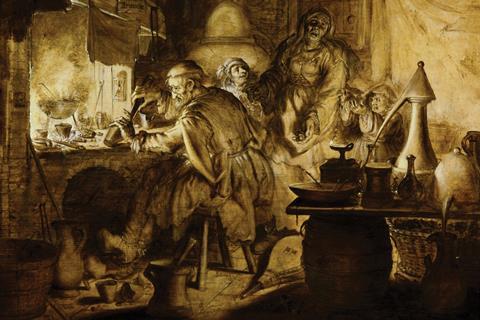 Mortar and pestles were common pieces of equipment in alchemical laboratories

Sustainability, however, has reawakened chemists to what can seem a rather crude technique. Solvent-free reactions fulfil at least two of the of the 12 principles of green chemistry: ‘safer solvents and auxiliaries’ and ‘prevent waste’. But green credentials should not be the only motivation to inducing reactions with mechanical energy. Mechanochemistry’s vectorial nature means, in theory, you can conduct experiments in a more controlled manner than possible with, say, bog-standard thermochemistry, by affecting not just the magnitude of applied force, but also the direction.

More control means more chemistry. And mechanochemistry turns out to be an effective route to stoichiometric control, especially when making co-crystals and polymers. Final product stoichiometry tends to correlate well with starting mixture compositions in mechanochemical synthesis. Of course it’s not foolproof, but mechanochemical synthesis can avoid solubility variations between different components to provide homogeneous products more readily than thermal methods. Furthermore, mechanochemical reactions offer up many other experimental parameters for fine-tuning, including milling frequency and time.

Researchers are increasingly reporting chemical transformations that take place by mechanochemistry that are difficult, or just plain impossible, in solution. A prominent example being the dumb-bell-shaped C120 reported by Koichi Komatsu and co at Kyoto University, Japan, back in 1997.1 The solid-state mechanochemical reaction of C60 with potassium cyanide followed a completely different pathway in the liquid phase.

Marrying mechanochemical experiments more tightly to theory, however, is what the field needs to mature. Physico-chemical insights can revolutionise the field of mechanochemistry in the same way it did for classic organic chemistry. Theorists are already using quantum methods to probe molecules under the influence of an external force so it’s clear that scientists are trying to rectify this knowledge gap. Feedback from real-time reaction monitoring techniques, such as in situ x-ray powder diffraction, will also help researchers to unpick mechanochemical mechanisms.

Will 2018 be the year mechanochemistry makes its debut in your chemical toolkit? Or is it an old friend? Tweet me your experiences (@FoggNewton) or email me (newtonj@rsc.org).