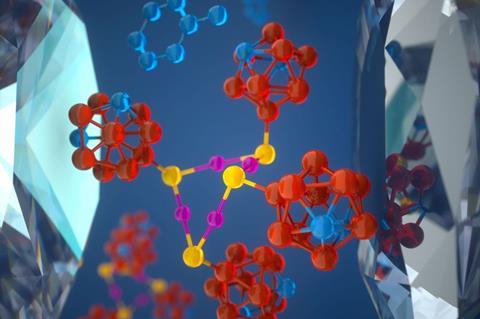 This illustration shows complexes of deformable molecules (yellow and pink) attached to ‘molecular anvils’ (red and blue) that are about to be squeezed in a diamond anvil cell. The molecular anvils distribute this pressure unevenly, breaking bonds and triggering other chemical reactions in the softer molecules

Squeezing a cleverly designed crystal can trigger the creation of nanoparticles in the first example of a pressure-driven mechanochemical synthesis.1 Computer models of the crystal’s structural change under pressure provide atomic-level insight into how force transforms into chemical reactivity, a process that is still a mystery for many mechanochemical reactions despite them being known about for centuries.

The first recorded instance of a mechanochemical reaction came from the ancient Greek philosopher Theophrastus, who described crushing mercury sulfide and vinegar in a copper morter and pestle to produce elemental mercury. In the 19th century, Michael Faraday and M Carey Lea investigated mechanochemical reactions more carefully. Lea noticed that reagents ground together often produced products that were different from the same reaction if it was initiated using heat.

Mechanochemistry was widely applied in the 1960s to make metal alloys from insoluble components. But over the past 15 years, researchers have expanded the mechanochemical toolkit to include reactions typically performed in solution. ‘The eye-opener is that mechanochemistry is really general for many inorganic and organic reactions,’ says Stuart James at Queen’s University Belfast, who was not involved with the squeezed crystal research.

Researchers have ground ingredients together to produce metal catalysts,2 make carbon–carbon bonds and perform asymmetric organic reactions3, among other reactions. The field’s rebirth is driven largely by an interest in sustainable synthesis. As mechanochemical reactions use little to no solvent, they produce less waste than solution-based chemistry.

Instead of triggering a mechanochemical reaction by stretching a material, Nicholas Melosh, at Stanford University, and his colleagues wanted to use pressure. To do this, they created a material that directed a compressive force to particular atoms, rather than squishing all atoms in the crystal equally.

The researchers attached rigid polyhedral carborane ligands to a deformable inorganic core containing copper and sulfur and squeezed the crystal in a diamond anvil cell at pressures up to 12GPa. When they examined the pressurised material using transmission electron microscopy, they saw it contained 10nm copper nanoclusters. Heating the crystal to 400°C under vacuum to trigger a thermochemical reaction produced cuprous sulfide instead.

To better understand how pressure changed the composition of the inorganic core, the researchers modelled the material’s structure under varying amounts of force. As the pressure increased from 2 to 12GPa, the carboranes moved closer together and copper-sulfur bonds lengthened, enabling an electron transfer from sulfur to copper to produce metallic nanoparticles.

Modelling also showed why a material with larger adamantyl ligands, instead of carboranes, did not produce nanoparticles, even under a simulated 20GPa of pressure. The large adamantyl ligands have less room to move in the crystal before crashing into each other, so the copper–sulfur bonds do not elongate.

Thinking about using this material for synthesis, Melosh notes that there are easier ways to make nanoparticles. But he wonders if the idea of a ‘molecular anvil’ – trapping a soft reaction centre between two hard ligands – could be applied to difficult reactions like carbon dioxide reduction. However, one challenge of mechanochemistry is that the general principles of reactivity are not well understood. ‘To do a new reaction, we’d have to figure out how to build a material that holds a molecule in the right configuration to get enough compression,’ he says.

Researchers are starting to investigate the atomic and molecular-level mechanisms driving mechanochemical reactions, James says. He says that the modelling in this work is a nice way to get atomic insights into the mechanism of this reaction.