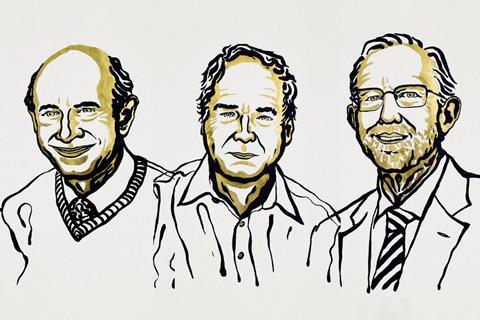 Harvey Alter, Michael Houghton and Charles Rice made seminal discoveries that led to the identification of the hepatitis C virus

In the midst of a viral pandemic, three discoverers of an entirely different virus – hepatitis C – have been awarded the Nobel prize in medicine. Harvey Alter from the US National Institutes of Health, Michael Houghton at Canada’s University of Alberta and Charles Rice at the Rockefeller University in the US share this year’s prize for uncovering the cause of a major global health problem that affects 71 million people – 1% of the world’s population.

Alter’s, Houghton’s and Rice’s three decades of detective work identified the disease-causing agent hiding in transfusion blood, which has led to curative treatments and tests sensitive enough to effectively eliminate post-transfusion hepatitis in many parts of the world.

Hepatitis C, like other hepatitis types, causes liver inflammation. But unlike type A, which causes acute jaundice that often disappears after a few months, types B and C are often symptomless in the early stages, but lead to chronic liver inflammation, cirrhosis and even liver cancer years or decades after the initial infection. There are about 1.75 million new cases annually, and every year almost 400,000 people die from hepatitis C.

Summary of the discoveries awarded by this year’s Nobel prize. The methodical studies of transfusion-associated hepatitis by Harvey Alter demonstrated that an unknown virus was a common cause of chronic hepatitis. Michael Houghton used an untested strategy to isolate the genome of the new virus that was named Hepatitis C virus. Charles Rice provided the final evidence showing that hepatitis C virus alone could cause hepatitis

The virus is bloodborne, meaning it isn’t transmitted through casual contact but through exposure to infected blood. Major risk factors are injection-drug use and transfusion of unscreened blood. This is how Alter came across the virus in the early 1970s – as a mysterious disease affecting patients who received blood transfusions.

After Baruch Blumberg’s discovery of the hepatitis B virus, for which he received the medicine Nobel prize in 1976, the number of people suffering from transfusion-related liver disease cases fell by 20%. But a large number of unexplained cases remained, patients who tested negative for both hepatitis A and B. By the late 1970s, Alter and his colleagues showed that this ‘non-A, non-B’ hepatitis could be transmitted to chimpanzees, the only non-human species susceptible to the infection. These and other experiments were proof that they were dealing with an unknown infectious agent, most likely a virus.

Nevertheless, the virus eluded isolation and genetic characterisation. In 1982, Houghton, working at the pharmaceutical company Chiron, went on to pinpoint the virus. He created a library of small complementary DNA fragments from RNA isolated from infected chimpanzees, transferred them to bacteria and then added blood serum from a hepatitis C patient. Out of the one million bacterial colonies, he found one that contained no human or ape DNA but instead the viral signature he was looking for.

But the final piece of the puzzle, proof that the virus was the sole cause of the non-A, non-B hepatitis symptoms, came from Rice in the late 1990s. Isolated virus samples had so far failed to cause the disease in chimpanzees. Rice, however, realised that many isolated viruses contained genetic variations that might hinder replication. He genetically engineered a variation that was devoid of the inactivating mutations. When injected into apes, this virus variation indeed caused the same symptoms as blood from an infected patient.

The laureates’ discovery has paved the way to the development of viral lines that replicate easily in cell lines as well as mutant mice susceptible to the virus – so new drugs and treatments don’t have to be tested on apes. Despite this, no hepatitis C vaccine exists yet, though it remains an active area of research. There are antiviral treatments such as sofosbuvir that can clear the virus entirely by inhibiting viral proteins, although access to these expensive drugs remains limited in low-income countries. Researchers are also developing drugs that target the viral RNA directly.

While none of the laureates was ever featured in Web of Science’s annual Nobel predictions, which are based on citation data analysis, all three received Lasker awards in the past – Alter and Houghton in 2000 and Rice in 2016. The Lasker award has gained a reputation for identifying future Nobel prize winners. Alter and Houghton also won the 2013 Gairdner Foundation award in 2013 for their work on hepatitis C together with Daniel Bradley from the US Centers for Disease Control and Prevention. Similar to the Lasker, this award has gone to many future Nobel laureates.

However, Houghton declined the award – and its associated CAD$100,000 (£57,600) prize money – saying it would be unfair to accept it because it excluded two of his Chiron colleagues and key contributors to the hepatitis research, Qui-Lim Choo and George Kuo. In the aftermath of his decision, Houghton published a piece in Nature Medicine, criticising the fact that large biomedicine prizes are often restricted to three recipients, which doesn’t represent the big teams often involved in discoveries. Given this background, some people think it’s unclear whether Houghton will accept the Nobel prize. No scientist has ever declined the prize out of their own volition, though in the late 1930s, several German laureates were forced to decline the prize by the Nazi authorities.