Immunologists James Allison and Tasuku Honjo have received the medicine Nobel prize for discovering how to release the brakes cancer puts on the immune system. In the last decade, their work has created powerful drugs – called checkpoint inhibitors – that that activate the body’s own immune response to destroy tumour cells.

‘For cancers such as advanced melanoma, lung, and kidney, these immune-boosting drugs have transformed the outlook for many patients who had run out of options,’ said Charles Swanton, Cancer Research UK’s chief clinician, in a statement.

In the mid-1990s, Allison – then at the University of California, Berkeley, US – and his team first realised that the protein CTLA-4 regulates white blood cells’ immune response. While other scientists investigated this mechanism to cure autoimmune diseases, Allison realised that it could also be used to treat cancer. Blocking CTLA-4 allows white blood cells to recognise tumour cells as foreign and destroy them. 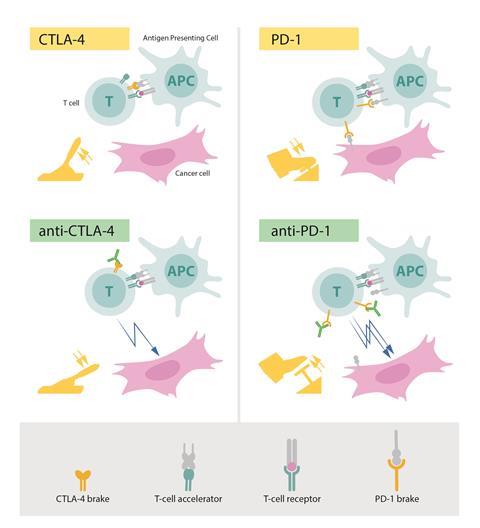 Source: © Mattias Karlén / The Nobel Committee for Physiology or Medicine

At the same time, in his lab at Kyoto University, Japan, Honjo was studying another protein, PD-1. While it operates on a different mechanism to CTLA-4, Honjo found that blocking it produced equally spectacular results by unleashing the immune system to fight cancer cells.

Initially, Allison and Honjo’s discoveries attracted little interest from the pharmaceutical industry. But in 2010, preliminary clinical studies showed dramatic results – for some patients, signs of skin and metastatic cancer entirely disappeared. In 2011, Bristol-Myers Squibb’s antibody drug Yervoy (ipilimumab) was approved as the first immune-activating cancer drug. It was quickly followed by others, as companies scrambled for a piece of an exciting and lucrative market.

‘It’s considered a big step in the fight against cancer,’ Nobel committee member Klas Kärre said in an interview. Unlike other immune-stimulating mechanisms – such as vaccinations – that only work in mice or in a select few patients, checkpoint inhibitors provide general and successful treatments, he explained.

‘The booming field of immunotherapy that these discoveries have precipitated is still relatively in its infancy, so it’s exciting to consider how this research will progress in the future and what new opportunities will arise,’ said Swanton

Today, there are six immune checkpoint inhibitors on the market, targeting CTLA-4, PD-1 and a third protein, PD-L1. Two were only approved last year. Realising many of these drugs work best in conjunction with each other, collaborations between pharma companies have started to create even more effective treatments.

Receiving the award might not have been a huge surprise for either laureate. Both Honjo and Allison featured in Clarivate’s 2016 list of people likely to win the Nobel prize based on citations of their published work. In 2015, Allison won the Lasker award – a prize that has a reputation for honouring future Nobel laureates.