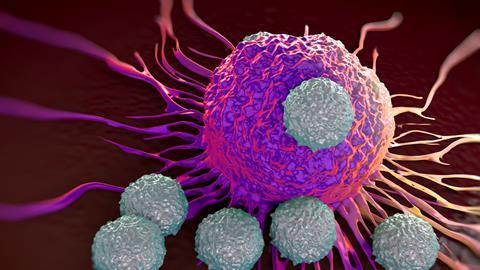 What is 'checkpoint therapy' and why did it win the medicine Nobel prize?

James Allison and Tasuku Honjo jointly took this year’s Nobel prize in physiology or medicine for ‘their discovery of cancer therapy by inhibition of negative immune regulation’. But what does this mean, how does it work and what makes it a cut above the rest?

What is immune regulation and what’s it got to do with cancer?

Tight control of our body’s natural defences is just as fundamental as the immune response itself – it means any foreign or damaged cells (including tumour cells) can be destroyed while ensuring healthy cells aren’t attacked. Key to this control are T cells, a type of white blood cell, that recognise ‘non-self’ entities such as bacteria and viruses, as well as the body’s healthy cells, using receptor proteins on their surface. ‘Brakes’ on the surface of T cells essentially halt activation of the immune response when it’s not needed. The foundation of Allison and Honjo’s Nobel-winning work rests upon the concept of harnessing the immune system to attack tumour cells by inhibiting two specific brakes – called CTLA-4 and PD-1 – to switch on our immune response. It’s been the most successful attempt yet to rid cancer patients of life-threatening tumours and, ultimately, the disease itself.

So why hasn’t this been achieved before?

What makes cancer so difficult to target and treat is its ability to outsmart the immune system in different ways. The fact Allison and Honjo have managed to overcome these tactics makes their feat all the more impressive.

How exactly does cancer fool the immune system?

Tumour cells are master manipulators of the body’s control mechanisms, allowing them to bypass cell death and continue to proliferate and spread. They can stop certain cells from maturing which in turn means that killer T cells are unaware that tumorous cells are in the body.

What is a checkpoint inhibitor?

This is the name given to the class of cancer drug that works by unleashing the immune system to attack tumours. In this case, they’re antibodies manufactured to bind to and block the function of CTLA-4 and PD-1. They’re called checkpoint inhibitors because they can turn these key proteins that control the immune response on or off.

What effect do they have on cancers?

The binding of the antibodies to their respective T cell brake is the molecular equivalent of letting the foot off the brake pedal – it releases the inhibition on T cells so they can target tumour cells. This process of attack is highly efficient and, for PD-1 targets in particular, led to long-term remission of metastatic cancer in some human clinical trials.

Allison is credited with early work on CTLA-4 and using an antibody to block inhibition of T cells – in effect taking the foot off the brake so they can kill tumour cells. Honjo is credited with discovering PD-1 and also recognising the importance of blocking its function as a potential cancer treatment. Rather than targeting the activation of the immune system or the tumour cell itself, both focused on removing inhibitors of the immune response – a potential reason why this treatment has succeeded where so many others have failed.

Yes, the CTLA-4 antibody inhibitor ipilimumab and PD-1 inhibitors pembrolizumab and nivolumab have all been approved as therapies for treating melanoma in combination with cancer vaccines. Three other antibodies have been developed that target a third protein, PD-L1 The success of these immune checkpoint therapies in reducing tumour size and spread has been unprecedented: both animal and human trials showed dramatic results for all the drugs tested. Though this turbocharged immune response can cause side-effects, they aren’t usually too serious and the therapy has been hailed as revolutionary for cancer treatment. Approval of these three drugs for other types of cancer, including lung and prostate, is expected in the coming years.

Why did this work win the Nobel prize?

In short, because it’s the closest anyone has come to finding a cure for cancer. Allison and Honjo will now each receive a Nobel prize medal coated in 24-karat gold and a joint share of the SEK9 million (£771,000) prize money at a ceremony in Sweden.