Mentorship in the sciences is associated with a two- to four-fold increase in a protégé’s likelihood of having a so-called ‘superstar’ career, according to one of the largest studies ever conducted on this topic to date. The new research incorporates information about tens of thousands of mentors and mentees and draws on actual performance data as well as machine learning to avoid sampling and recall biases.

‘If you are a researcher with a mentor who later goes on to be a prize winner, you doubled or quadrupled your probability of having a “superstar career,”’ explains Brian Uzzi, who led the work at Northwestern University in Illinois, US. Such success is defined as election to the US National Academy of Sciences (NAS), ranking among the top 25% highest citations in your field and winning a science prize of one’s own. ‘If you broke those three measures apart, you also had a much higher probability of just being a prize winner, or just being elected to the NAS, or just being a very highly cited scientist,’ Uzzi notes. ‘So, it really helped you across a spectrum of measures.’ 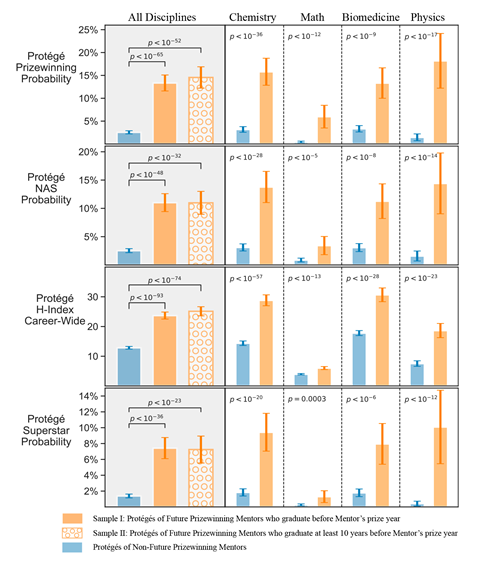 The study examined nearly 40,000 scientists who between them published more than one million research papers in chemistry, biomedicine, math or physics between 1960 and 2017. The team grouped together mentors with similar records and reputations who attracted protégés of similar talents and expected levels of professional success, and concluded that mentorship ‘strongly predicts’ protégé success across diverse scientific disciplines.

One interesting and unexpected finding is that mentees succeed best when they separate from their mentor by showing intellectual independence. ‘This is very surprising to a lot of academics because in this business you tend to see that the student who is doing the same type of research as their famous mentor is the one that people want to hire, because that student is the torchbearer, so to speak, of that important body of research,’ Uzzi explains.

The study’s findings indicate that the key to good mentorship is passing on an ability to address problems in a way that is novel and that stimulates the imaginations of other scientists. ‘When a student is really able to successfully break out on their own, it is because of the skills that their mentor gives them,’ Uzzi says. ‘Although the returns in science are very big, when you do something new and original it is also a very high-risk strategy, and without the right kind of skills you are much more likely to fail.’

More specifically, successful mentors appear to pass on tacit knowledge – described as rare skills for conducting and communicating novel scientific findings – and this tends to be transferred between people through face-to-face interactions and hands-on learning. Such skills, however, are obviously much harder to transmit in the Covid-19 era of online learning.

Consider the Slackers and the unsuccessful

Uzzi and his team want to investigate the effect of online learning further, and have initiated a follow-up study that uses data from the communication platform Slack. ‘We are trying to work with some researchers who have access to that data to see how conversations and how idea exchanges have changed before and after Covid, when students had to switch to Slack to communicate all the classroom work,’ Uzzi explains. ‘We are very curious to do some natural language processing and some text mining to see how the topic of discussion has changed, and what the students are saying they are having the hardest time grasping.’

Roberta Sinatra, who researches social systems based on massive data sets at the IT University of Copenhagen in Denmark, says the study is impressive because of the amount of care taken to control confounding factors. ‘Given these controls, the results are surprising, yet make total sense: there is a hidden know-how that passes from mentor to protégé.’

Sinatra notes that her previous research has shown a similar effect in scientific publishing, whereby protégés with mentors who publish in high impact journals are more likely to do so themselves.

However, she points out that the Northwestern study does not consider the mentees who weren’t successful and, for example, never published an article or exited the system early. ‘Do prize-winning mentors have a higher rate of non-successful protégés, because these mentors are more focused on their career and can’t take care of weak students,’ Sintra asks. ‘I guess that to answer this kind of question, we will need further datasets.’

In addition, she suggests that there are important implications to the finding that intellectually independent mentees have higher chances of success. ‘Mentors should promote not only protégés that are “faithful” to their mentors and continue publishing with them, but should also recognise and reward independence.’