Scientists in Switzerland have incorporated pulsing human heart tissue into a microfluidic device to make a miniscule model of a living system that could be used to test new drugs.

The hanging drops are connected through 200Î¼m-wide channels

Microfluidic technology manipulates tiny volumes of liquid. One of its most exciting applications lies in building models of the human body – so-called body-on-a-chip or microphysiological systems. Many microphysiological systems already allow small human tissue samples, which approximate the behaviour of whole organs, to be tested under different conditions. Models of multi-organ systems are linked by slender liquid channels, and the flow of liquid and metabolites from one sample to the next can be controlled with pumps and valves. However, a huge challenge for the concept is that – after the attritive processes of extraction, culturing and insertion into a microfluidic environment – the samples often behave quite differently to the original tissue. This is an obstacle that Olivier Frey and co-workers at the Swiss Federal Institute of Technology (ETH) in Zurich are working to overcome.

In collaboration with their industrial partner, InSphero, Frey’s team has devised a microfluidic hanging drop system. The system uses liquid drops that hang from a surface and are interconnected by micro-engineered liquid channels. Cells can be suspended in these drops, and the cells in different drops can interact through the chemicals they produce. Frey explains how seeding cells in hanging drops is an old technique that allows cells to group into 3D spheroids, which act much more like real tissue than traditional 2D cell cultures. This is because the tissue cannot adhere to a solid surface, and therefore aggregates at the air–liquid interface. 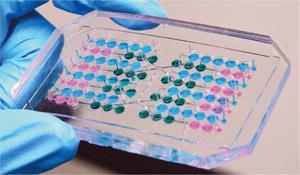 The group invented a pneumatically activated pump to control liquid flow from one drop to another. They even harnessed the pulse rate of beating human heart tissue in one of the drops to regulate the flow rate in the whole system. Stimuli affecting the pulse rate of a healthy human heart elicit the same effect in this microtissue. ‘We had to develop [the pump] from scratch, because these hanging drop networks are not common. We then synchronised the frequency of the pump… over an optical feedback loop with the beating rate of the heart tissue spheroid,’ says Frey.

InSphero chief executive Jan Lichtenberg describes the device as ‘a truly innovative solution for liquid propulsion in open-channel microfluidic systems.’ ‘The pulsatile nature of the liquid movement is an additional benefit when we think about mimicking flow physics of the human body,’ he adds.

‘This is one of the most interesting recent developments in the field of microfluidic systems,’ comments Wouter van der Wijngaart, who heads up the research into micro- and nanofluidic systems at the KTH Royal Institute of Technology in Sweden. ‘This type of system has the potential to become the de facto workhorse in the field of 3D microtissue culturing.’