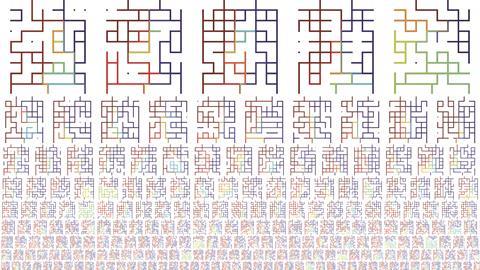 Scientists in the US have devised an algorithmic process to speed up the design of microfluidic chips, generating a library containing thousands of different chip designs that researchers can search by functionality.

Microfluidic chips, which are widely used in areas such as disease diagnostics and DNA sequencing, consist of tiny channels etched into a glass or plastic. These microchannels are connected to achieve a specific function, for example mixing fluids. The design process, however, has remained relatively unchanged since their emergence as William Grover from the University of California, who led the new study, explains: ’We design them by hand and we test them – if they work great, but more often than not, they don’t, so then I have to start all over again. That process is so slow and inefficient.’

With a new online database created by Grover and his team, even researchers with no microfluidics experience can find the perfect chip to suit their needs. Grover’s team created a computer program that generates thousands of random microfluidic chip designs and simulates their behaviour. The database collects these simulated designs, and users can query it to find chips suitable for given tasks.

Grover’s group demonstrated the concept by letting the software design chips that would take two fluids as inputs and generate three output fluids with specified concentrations. They fabricated and tested 16 of the suggested designs and found that they worked as well as other microfluidic mixers. 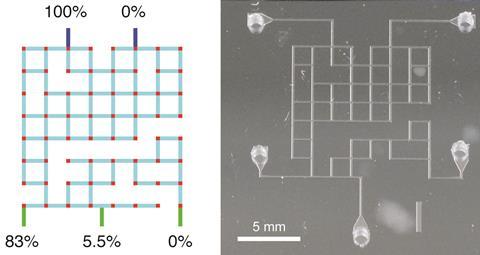 ‘With this research, users can be sure to pick the best design possible: a huge step towards the introduction of “best practice” layouts and standardisation in microfluidic chip design,’ says Bastian Rapp from the Karlsruhe Institute of Technology, Germany, whose researches microfluidics.

Kwang Oh from the department of bioengineering at the State University of New York at Buffalo, US, says that this approach could improve efficiency in his research group. ‘When I train new students in my lab, it takes several months because they need to learn how to design new microfluidic devices and fabricate them,’ he says. ‘[Grover’s] database library provides my students with downloadable chip designs. This can help them minimise their initial efforts in designs and spend more time on their specific applications.’

Grover and his team are now looking to assemble libraries containing chips with more complex designs and applications, incorporating active components such as valves or pumps. Junchao Wang, a PhD student in Grover’s group, adds: ‘In theory, for any chip that can be simulated by a computer, we could apply our method to it. There’s no restraint on it.’