Micromachines capable of navigating a tiny ‘lab on a chip’ have been developed by scientists in Spain. Protected by a protein-resistant layer, the micromotors can even swim through complex biological fluids, opening the door on a greater range of clinical devices for early diagnosis and analysis.

Micromotors have been used for a whole range of applications from mopping up bacteria to hydrogen generation. Now, research conducted by Alberto Escarpa, Beatriz Jurado-Sánchez and co-workers at the University of Alcalá, combines the merits of these tiny machines with microscale analysis of a lab-on-a-chip device. Controlled by a magnetic field, the micromachines can navigate their tiny lab, carry out fluorescence-based molecular detection and transport cargo in simulated blood plasma.

Normally, such lab-on-chip devices require tiny valves and pumps to precisely manipulate the sample, but these mechanisms are replaced by the rocket-like particles. The micromachines can move around in hydrogen peroxide solution by breaking down the peroxide over a platinum catalyst, producing a driving flow of oxygen bubbles. 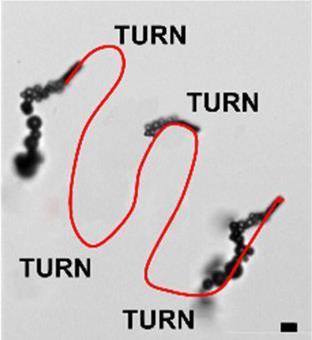 A key development in the reported magnetic carbon micromotors is their potential to be used in more complex media compared with previous works. This is thanks to a unique inner poly-O-phenylenediamine layer that prevents biofouling, the accumulation of proteins that can stop the platinum catalyst from working. Motors without this layer stop working when added to a protein-rich solution such as blood plasma, whereas the coated motors can effectively transport sugar-modified polystryene particles around the device.

Although the use of nanomachines have already been demonstrated by several groups over the past five years, Joseph Wang, a nanobioelectronics expert from the University of California San Diego, US, feels that Escarpa’s and Jurado-Sánchez’s work is ‘a wonderful example’ of using carbon-based microrockets for active transport.

This is backed by John Gibbs, who researches nanomotors at Northern Arizona University, US, who agrees that while the field has promised ground-breaking applications, ‘very few practical applications have thus far been achieved’. He calls this work is a ‘potential breakthrough’ especially with the development of the anti-fouling protective layer, which ‘overcomes a major limiting factor in the advancement of bio-medical applications in this field’.

In the future, Escarpa, Jurado-Sánchez and their team will be working in close collaboration with hospitals to develop a prototype for diagnosing sepsis in newborn children. ‘We hope that one day this new device will contribute to reduce the high mortality rates associated with this serious disease,’ says Escarpa.