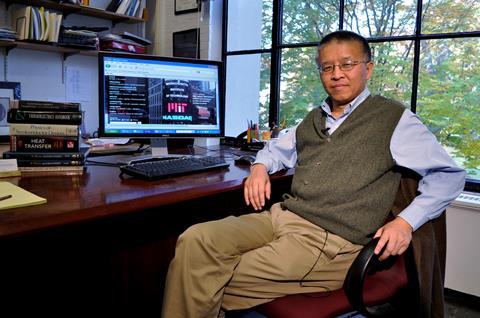 The colleagues of MIT nanotechnologist Gang Chen have rallied around him, rebutting the charges against him in a letter to the institute’s president

More than 100 faculty members at the Massachusetts Institute of Technology (MIT) have signed a letter to their university’s president, Rafael Reif, attacking the arrest of one of its nanotechnology professors for failing to report his ties to the Chinese government. Gang Chen, who directs a nanotechnology laboratory and a solid-state solar thermal energy centre at MIT, was taken into custody on 14 January and faces several charges, including wire fraud, that together carry a jail sentence of up to 30 years and $750,000 (£550,000) in fines.

The letter, which picks apart US Department of Justice (DOJ) allegations against Chen and urges MIT to continue defending him, was spearheaded by Yoel Fink, a materials science professor at the university. It was first circulated among MIT’s faculty on 19 January, and by the time it was delivered to Reif two days later it had collected over 100 signatures. MIT faculty continue to sign the letter, including a substantial contingent from the chemistry department, and it has now been signed by around 170 people.

‘Some of the most prominent folks in the science community at MIT stepped up immediately,’ including Nobel prize winners, Fink tells Chemistry World. Chen, who was born in China and became a naturalised US citizen in 2000, has worked at the university for about 20 years.

‘We feel that he deserves full support and commitment from MIT. Moreover, we are writing to encourage you and MIT to stand forthrightly, proudly and energetically behind Professor Chen,’ the letter reads. ‘We are troubled that the complaint against Professor Chen vilifies what would be considered normal academic and research activities, including promoting MIT’s global mission.’

The letter takes issue, for example, with the government’s assertion that Chen received about $29 million in foreign funding since 2013, including $19 million from the Southern University of Science and Technology (SUSTech) in China.

‘Our understanding is that Professor Chen did not receive $29 million. MIT was the recipient of this money, which benefited the institute, the research programmes of many of its faculty, and its students,’ the faculty members write. Singling him and his research group out as the ‘sole’ recipient is ‘simply wrong’, they argue, emphasising that the partnership with SUSTech was approved and overseen by MIT at the highest levels. The letter points out that MIT has created a formal centre with SUSTech, and explicitly appointed Chen as its faculty leader.

‘Funding science in the US these days is a fragmented reality,’ Fink says. ‘You mix and match funding to support your students and to support the research – there is nothing nefarious about that.’ Because America’s competitiveness depends so heavily on scientific and technological talent from abroad, he says, its national security is harmed by the message that the US government will question the loyalty of foreign scientists.

The names of the letter’s signatories are being kept confidential amid fears of retribution. ‘I don’t want people harassed, there is a certain amount of fear in this community,’ Fink says. But some of these faculty members want their names on the record, including Keith Nelson, who joined MIT’s chemistry department as an assistant professor in 1982 and is now a principal investigator. He has collaborated with Chen for about a decade, mostly in the area of optical measurement of heat transport.

‘When I heard that he had been arrested, I thought it was shocking,’ Nelson recalls. ‘Gang is an outstanding scientist and also is a great mentor and supervisor.’ He describes the accusations against him as involving ‘routine, innocuous parts of our job, like writing letters of recommendation for our students applying for fellowships’.

The indictment against Chen is even more disturbing than the criminal complaint, according to Nelson. ‘Stripped of the innuendo about $19 million or $29 million research funding somehow kept hidden, it comes across as amazingly thin,’ he says. ‘A consulting payment is mentioned, but gone is the suggestion that he received income that was not reported properly in his tax returns.’ It appears that none of the activities Chen is accused of failing to disclose in a Department of Energy research grant and an annual report involve research support or collaboration that would normally be reported, Nelson adds.

In the meantime, Chen’s daughter has started a GoFundMe campaign to collect money to cover her father’s expenses, and has raised more than $400,000 so far. In her GoFundMe page, she says that MIT has agreed to pay his legal fees, but notes that ‘there will undoubtedly be additional expenses for our family that extend beyond this agreement’.

Both Fink and Nelson suggest that the new Biden administration might reverse course on the Trump administration’s hunt for researchers with connections to China. ‘We have an opportunity to reset the dialogue … to not be adversarial but to actually work with the feds to increase the competitive-edge of the country,’ Fink says.

Earlier this month dozens of community organisations, advocacy groups and science associations wrote to Biden, urging him to take further steps to combat what they described as the federal government’s ‘pervasive racial bias and targeting of Asian American and Asian immigrant scientists, researchers and students’. This DOJ mandate, the organistions argued, has resulted in US federal agencies pressuring funders, universities and research institutions to participate in racial, ethnic, and national origin profiling. This, they claim, has led to discriminatory investigations of people of Chinese descent. ‘Universities previously handled matters such as non-disclosures in an administrative process, but now these issues have been criminalised,’ the letter reads.