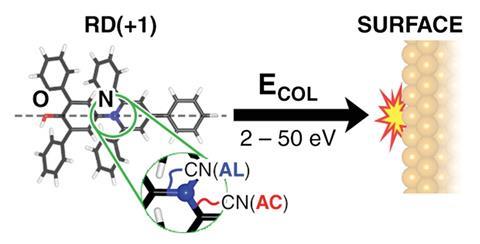 For the first time it has been shown that shooting a complex molecule against a solid surface breaks its bonds selectively.1 Using a system developed by the University of Oxford’s Stephan Rauschenbach, German and UK researchers fired beams of ions of Reichardt’s dye against a copper crystal. While this flattened all the ions, many remained intact, while the remainder broke apart in just two different ways.

‘We are compressing this molecule by 50% of its size,’ says Rauschenbach. ‘Once you know quantum mechanics, Pauli and Coulomb repulsion, you know that this is quite tremendous. When you look at the energy scales, and equate them to temperature, you would end up with several thousand Kelvin. You would think that this ends up in an amorphous mess, but it all happens in such a short amount of time that the reaction can be selective.’

The team devised this mechanochemistry approach using the electrospray ion beam deposition (EID) approach that Rauschenbach had previously developed. While working with Klaus Kern at the Max-Planck-Institute for Solid State Research (MPI-FKF) in Stuttgart Germany, he devised the technique to deposit large molecules on surfaces in vacuum chambers. John B Fenn won the 2002 Nobel prize in chemistry for electrospray ionisation, commonly used by analytical chemists today to study large molecules using mass spectrometry. But whereas those methods create beams of around a million molecules per second, Rauschenbach’s launches a billion molecules per second.

Until now, the scientists have used the approach to set molecules up for investigation of their structure using methods like scanning tunnelling microscopy (STM). ‘We always try to be careful not to damage the molecule,’ Rauschenbach says. ‘But you ask yourself: what happens if you’re not careful?’

As a reaction dynamics researcher, Kelvin Anggara from MPI-FKF wanted Rauschenbach not to be careful. In 1990 Sylvia Ceyer from the Massachusetts Institute of Technology, US, had first fired methane at nickel surfaces, Anggara notes.2 She called the reactions ‘splats’, he adds. ‘At some point reaction dynamics people can no longer transfer big molecules into the gas phase because they are not volatile enough,’ he says. ‘So, Stephan, with his machine comes in a very opportune moment.’

Studying the outcome using STM, the team found that even if they were not careful, Reichart’s dye ions often landed on the copper surface intact. As they increased collision energies, they increasingly saw two specific bonds breaking, both adjacent to the positively charged nitrogen atom at the molecule’s centre. The less common fragmentation kept the pyridinium ring containing the nitrogen atom intact, splitting the original dye molecule in two. The more common fragmentation opened the pyridinium ring but remained a single molecule. As such Rauschenbach is reluctant to call these reactions splats, thinking the term sounds too chaotic. He prefers ‘flattening mechanochemistry’.

Anggara says that such chemistry is now ‘less of a black box’. Rauschenbach suggests integrating the approach with precision electronic fabrication processes that already use ion beams. This could help put sensing molecules like receptor proteins onto nanostructures to make new types of detector, for example.

Pranav Shirhatti from the Tata Institute of Fundamental Research in Hyderabad, India would like to see whether the same happens with other combinations of molecule and target. ‘The fact that selectivity is observed in the chemical reactions is a bit surprising and makes this work interesting,’ he says.

Takashi Kumagai from the Fritz Haber Institute in Berlin, Germany, says the experiment is ‘like throwing an egg against a wall’, but shows ‘hitherto unknown bond selectivity’. He notes that the unique combination of EID and STM won’t be easily available, but any findings it produces will be important. ‘The new understanding of single-molecule mechanochemistry with large molecules, including biological compounds, will be widely shared,’ Kumagai says.