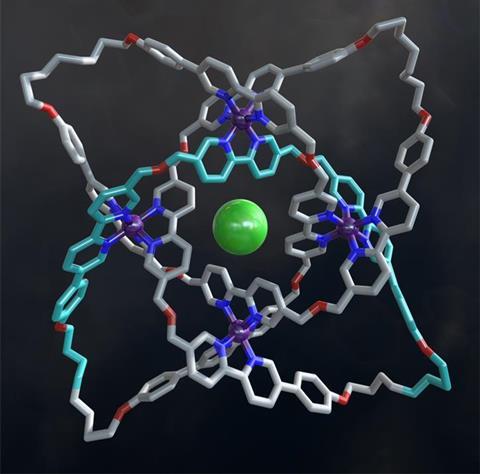 A Guinness world record has been awarded to David Leigh’s group at the University of Manchester, UK, for tying the tightest ever knot.

The knot in question is a 192-atom molecular loop with eight crossings that the group unveiled earlier this year. As well as being the most tightly knotted physical structure it is the most complex regular woven molecule ever made, comprising three molecular strands plaited together to create a circular triple helix.

The knot was tied by weaving the ligand strands around four octahedral iron(II) ions to fix the crossing points. The group has a long history of producing complex interlocking molecular structures but this is their first officially recognised world record.

‘I grew up watching Roy Castle and the McWhirter twins (the co-founder of The Guinness Book of Records) on the TV programme Record breakers,’ Leigh said in a statement. ‘So I know that nine-year-old me would be particularly proud.’