The final act of US Chemical Safety Board’s departing chairwoman was to fire its managing director, who’d been on paid leave for three years

The managing director of the embattled US Chemical Safety Board (CSB), who had been on paid administrative leave since June 2015 over accusations of mismanagement and leadership deficiencies, has just been officially terminated by the outgoing chairwoman of the agency, which investigates US chemical accidents.

Vanessa Sutherland abruptly resigned her job as the CSB’s chairperson on 22 June, and she officially removed Daniel Horowitz from his post the previous night. A federal employee salary database had once shown that Horowitz earned $158,700 from the CSB in fiscal year 2015, and that he drew from the agency a salary of $160,300 and $161,900 in the next two years, respectively, despite not working. 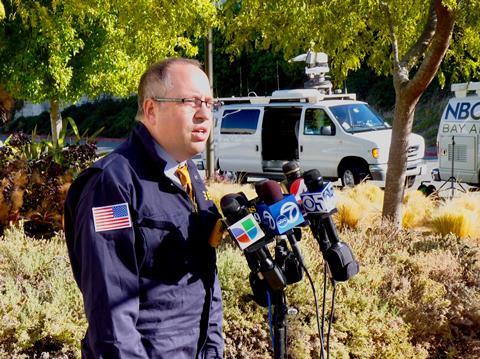 Horowitz at the Chevron refinery in Richmond, California, following a major fire there in 2012

Sutherland’s sudden action shocked Horowitz. He says the three-year delay in his termination speaks to the ‘feebleness’ of the charges against him. Horowitz says he and his lawyers had tried to settle the matter multiple times, but their proposals were rebuffed. He has appealed his removal to the federal civil service court, and still wants to be reinstated as the CSB’s managing director. ‘The broader context is important here – the CSB is in very serious decline, and about 40% of its investigators have left,’ Horowitz states.

The agency’s previous chairman, Rafael Moure-Eraso, was forced to resign over mismanagement allegations in March 2015, amid congressional and White House pressure. Moure-Eraso, who was never prosecuted, provoked a backlash simply by pushing for significant safety changes in chemical industry practices, Horowitz tells Chemistry World. The CSB currently appears to be in tumult. In addition to these personnel issues, President Trump has twice proposed to defund the agency.

Sutherland left the CSB to become a vice president at the Virginia railroad company Norfolk Southern Corporation, effective 25 June. Meanwhile, Kristen Kulinowski, who has served on the CSB since August 2015, is filling in as the agency’s ‘interim executive authority’.