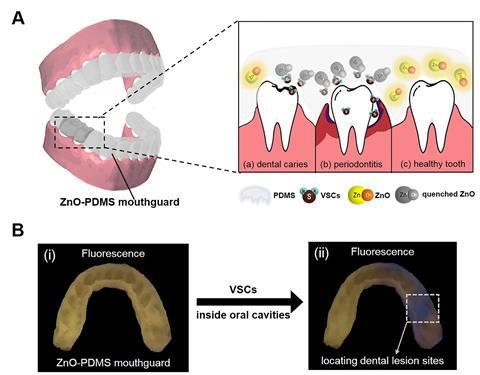 A mouthguard that can detect the early signs of tooth decay and periodontitis has been developed by researchers from China. Made from a nanocomposite, the device reacts with the volatile sulfur compounds released by the bacteria that cause bad breath to highlight where dentists might need to make closer examinations.

Tooth decay is believed to affect some 2.4 billion people across the world, with a greater prevalence among young children and senior adults – and in 2018 alone £332.6 billion was spent on treatment globally. Although dental lesions are easily addressed in their initial stages, such early signs can be well hidden and may be accidentally overlooked or ignored in favour of more severe cases – especially in countries where oral health services are at a premium.

Tooth decay and gum disease are related to the build-up of food residue and plaques of anaerobic bacteria. When these microorganism break down sulfur-containing proteins, they release volatile sulfur compounds such as hydrogen sulfide and methyl mercaptan – the detection of which has the potential to reveal where oral health problems are developing. Unfortunately, existing detection methods are either unable to localise emissions to a particular part of the mouth, or call for expensive and bulky gas chromatography equipment.

Biomedical engineer Jianhua Zhou at Sun Yat-sen University in Guangzhou, China and colleagues have developed a simpler and more economical approach – a fluorescent mouthguard that, when worn for seven hours, stops fluorescing around sites where volatile sulfur compounds are being released. Made from a zinc oxide-poly(dimethlysiloxane) (ZnO-PDMS) nanocomposite, the mouthguard was shown in tests on human subjects to accurately flag sites of dental lesions.

The team predict that a mass produced mouthguard might retail for as little as $3–$4.50 (£2.40–£3.60). Being transparent, the guard – which is similar to those worn as protection during sports, or to mitigate teeth grinding at night – could be worn during the day or night, prior to a dental check-up. ‘I wore the mouthguard as well, it is very comfortable!’ Zhou tells Chemistry World.

‘It is exciting to hear of any new device that has the potential to improve oral health, especially a diagnostic aid,’ comments James Fernando, a dental practitioner and research fellow at the University of Melbourne in Australia, who was not involved in the present study. However, he adds, ‘I do not envision a scenario where a dental practitioner would not examine the whole mouth based on site specific markers of tooth decay and periodontitis produced by such a device – there are numerous other oral health concerns that would necessitate a thorough oral examination.”

Zhou and colleagues are now looking to prepare a series of the new mouthguards suitable for use by people of different ages – after which they plan to mass produce the mouthguards for large-scale screening. Alongside this, the team hope to develop other mouthguards which are able to help detect other diseases, both of the mouth but also of the respiratory and digestive systems.