A family of fluorescent molecules that give certain shark species glowing green skin has been discovered by researchers in the US.

The catsharks Cephaloscyllium ventriosum and Scyliorhinus retifer are biofluorescent – some areas of their skin can absorb blue light from the ocean and then emit light with a longer wavelength, creating bright green patterns that can only be seen by other sharks. A group led by Jason Crawford at Yale University has discovered that this is due to a previously undescribed family of small molecule metabolites present in their denticles, tiny tooth-like scales that make up their skin. This sets the sharks apart from other sea creatures such as jellyfish whose biofluorescent properties are due to well-characterised proteins like GFP. 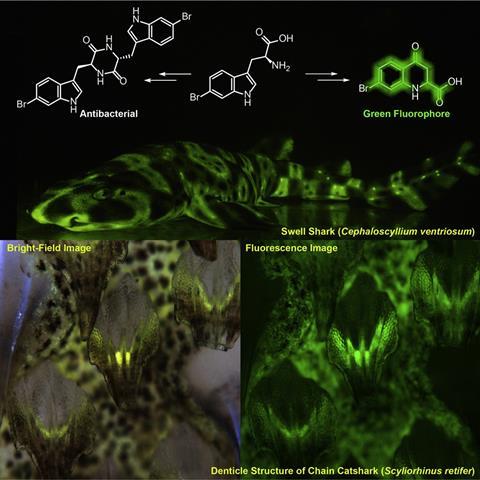 The researchers took samples of denticles from both shark species and used a range of analytical techniques to identify the molecules responsible for fluorescent properties. They isolated several brominated molecules that are part of the tryptophan and kynurenine metabolic pathways.

Crawford and colleagues think the metabolites they identified might have other functions aside from fluorescence. Initial experiments have indicated they may be antimicrobial, and in vertebrates analogous molecules are known to be involved in processes such as the immune response. The team now want to explore these possibilities in more detail. They say the discovery of new fluorescent molecules could also help improve imaging technology.