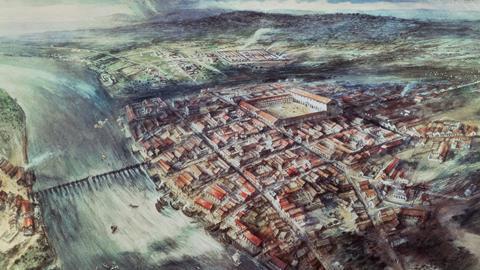 A team of archaeologists and health scientists has found that lead poisoning could have afflicted city dwellers in Londinium, the Roman settlement on the site of modern London, during the Roman occupation of ancient Britain.1 The levels of lead they found in Londinium Roman bones were so high that they would have exceeded limits considered toxic.

Environmental health scientist Sean Scott of the University of Wisconsin-Madison and colleagues found that lead levels in bones taken from three cemeteries in Londinium may be more than 70 times higher than those in remains from pre-Roman Iron Age Britain. And an analysis of the lead isotope composition fits with that seen previously in Roman-age lead pollution in Britain. The researchers say that the lead levels are high enough to have had a possible effect on health, perhaps even reducing birth rates.

Lead pollution during Roman times has been demonstrated previously,2 but generally has been associated with lead mining. It hasn’t been clear whether serious lead pollution could have afflicted ordinary citizens in Roman urban settlements.

The researchers used inductively coupled plasma mass spectrometry to measure the amount of lead, as well as a host of metallic trace elements, in the bone samples. The pre-Roman samples came from burial sites in Hampshire and Yorkshire.

The Roman samples have lead concentrations ranging from 8μg/g to 123μg/g, with a median value of 26.5μg/g – whereas those of the pre-Roman samples are generally no greater than 0.5μg/g.

There are several possible sources of this lead. The Romans made extensive use of lead plumbing in their settlements – but there’s not much evidence of it in Londinium. However, they also used lead to made drinking vessels, and even added lead acetate, made by reacting lead with grape juice, to foods as a sweetener – ‘sugar of lead’.

It’s well known that urban areas tend to concentrate pollution today, and Scott says that ‘it is possible that something similar could have happened in ancient urban areas’. He adds that ‘there was no single source of lead pollution, but rather widespread and probably numerous societal practices that led to the high levels of exposure’. The researchers anticipate that similar levels of lead might have been common in cities throughout the Roman Empire.

This isn’t the first time high lead levels have been found in people within the Roman Empire – relatively high lead levels have been reported in tooth-enamel.3,4 The health consequences are still a matter of speculation though. From their findings, Scott and colleagues estimate that most citizens of Londinium would have had blood lead levels above the threshold designated as toxic by the US National Institute for Occupational Safety and Health. This, they say, could have decreased sperm counts and led to premature or stillbirths. Some researchers have even suggested that lead poisoning contributed to the collapse of the Roman Empire, although this is a controversial idea.

However, archaeologist Janet Montgomery of the University of Durham in the UK, who has previously studied lead levels in Roman teeth, cautions against being too hasty to accept the new results. She says that bone is well known to absorb lead and other metals from the soil, so it is hard to rule out post-burial contamination. For the same reason, she is wary of using trace-element measurements to gauge the extent of such alteration. Also, she adds, ‘you do not know if the lead you are measuring [in bone] has accumulated from fairly low level exposure over a long time, or derives from one period of high exposure many years in the past, or something in between’.