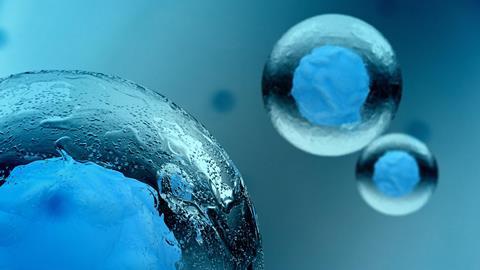 Nanopipette probes cells without killing them

A research team from Japan has developed a method for sampling tiny amounts of fluid from single cells without killing them.1 They hope their technique will allow scientists to better study cellular mechanisms from differentiation to cancer formation.

Advances in analytical detection methods enable processing and detection of analytes, even individual molecules, from single cell samples. But before chemical analysis can take place, a sample must be extracted from the cell – a procedure the cell usually doesn’t survive.

Takehiko Kitamori’s team from the University of Tokyo now managed to form a 100nm-wide hole in a human cell membrane and connect this hole to a tiny pipette to extract a sample – all while keeping the cell alive. Instead of piercing the cell by force, they coated their nanopipette with a lipid bilayer, the same material the cell membrane is made out of, which causes the two to fuse. 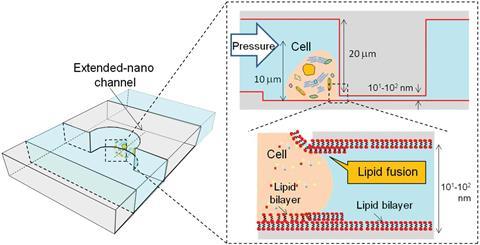 The cell’s outer lipid bilayer fuses with the pipette’s lipid layer, which allows researchers to take a tiny sample of the cell’s cytoplasm without killing the cell in the process

The researchers etched two parallel microchannels onto a glass substrate, one with a single-cell chamber, connected by a perpendicular extended nanochannel that acts as the pipette. However, just pushing the nanopipette into the cell simply deforms it instead of piercing it.

A member of the Kitamori’s group, Kazuma Mawatari, says that connecting the cell with the pipette is the most technically challenging part: ‘The size of a single cell (10,000nm) and the nanochannel (900nm) are quite different, which makes the connection difficult just by force.’ The team solved the problem by coating their nanopipette in a bilayer of the phospholipid DOPC, which causes the cell membrane to fuse to it. This creates a leak-free hole in the membrane.

After extracting 39 femtolitres of cytoplasm (that is about a billionth of the volume contained in a single drop of water), they released the cell from the chamber and kept it in a growth solution, proving it survived its ordeal. 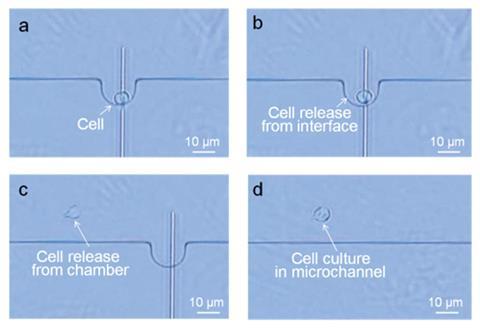 Snapshots of the cell being released after sampling

Young-Tae Chang at Pohang University of Science and Technology in South Korea, who develops and uses sensors to understand biological processes, is enthusiastic about the work: ‘Extracting the contents from a single cell is extremely challenging, and it is exciting to see various promising solutions are being reported.’ Nicholas Melosh at Stanford University, US, recently developed nanostraws, which can also extract the contents of a cell without causing damage.2 ‘It may be too early to judge which technique is better though,’ Chang adds.

Thomas Laurell, who researches microsensors at Lund University in Sweden, says that ‘although still in its early phase of development, the reported microfluidic/nanofluidic interface for analysis of single cells may become a hallmark in the future’.

Kitamori’s group is now working on ultrasensitive laser spectroscopy that could be combined with their sampling method to analyse cell contents.