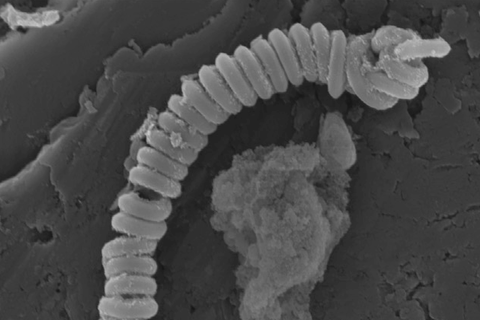 A new technique that uses spring-shaped carbon nanotubes to catalyse the breakdown of microplastic particles has been pioneered by researchers in Australia, who say the approach could be used as a way to clean up plastic contamination in sewage.

Microplastics have become ubiquitous pollutants household wastewater as well as rivers, lakes and seas, threatening marine life and human health. Some cosmetics generate large quantities of microbeads, which are difficult to remove in water treatment plants.

Shaobin Wang and colleagues at the University of Adelaide are hopeful that this problem could be solved by using an oxidant that produces free radicals to attack the plastic, eventually breaking it down completely and generating water and carbon dioxide.

The oxidant they worked with was polymonosulfate, a typical persulfate salt with an asymmetric structure (HO-SO4) that generates sulfate and hydroxyl radicals. To activate it, the team engineered magnetic nanocarbon structures: carbon nanotubes coiled in a spring-like helix shape with nitrogen dopants and encapsulated manganese carbide nanoparticles.

‘We built a nano-spring structure to increase the mechanical robustness and buried metal nanoparticles beneath the carbon layer to afford the carbon materials with magnetic properties, which can be recycled easily afterwards in the presence of a magnet,’ explains Xiaoguang Duan, a member of the Adelaide team. One of their aims was too overcome certain major drawbacks of using nano-scaled carbon materials, such as poor stability and difficulty in recycling.

After two hours with the oxidant and catalyst, cracks appear on the surface of a plastic bead (left) and other pieces of debris start to degrade (centre, right)

Their system successfully degraded pieces of polyethylene in lab tests. After a few hours of treatment, visible cracks appeared on the surface of microplastic beads, and small pieces of plastic debris formed a thin film which then developed holes as it was digested further. Toxicity tests showed the organic intermediates to be environmentally benign to algae, with the potential to serve as food for them in a wastewater treatment system.

‘The challenge for future applications is to further reduce the cost for large scale manufacture of the carbon catalysts and to find effective strategies to separate the microplastics from the water effluent,’ says Wang. His team are now focusing on other types of low-cost and high-performance carbon materials with porous structure and robust mechanical strength.

Jesus Ojeda Ledo, a chemical engineer at Swansea University in the UK, describes the work as exciting, though he stresses that further tests are needed. ‘Their best microplastic removal was achieved after 8 hours at 160°C,’ he notes, ‘and this may not be quite practical in a real wastewater treatment scenario. Future removal technologies should be less time-consuming and less energy-demanding.’

He adds that toxicity relied on green algae in the reaction filtrate, whereas ‘the wastewater ecosystem is much more complex and further tests may be required.’

Matthew Davidson, an inorganic chemist at the University of Bath, UK, adds that developing better ways of disposing of and recycling plastics is vital, and that catalytic degradation could be a useful approach. ‘Although that requires separation which may be technically challenging and costly,’ he points out. ‘It is premature to say whether it is too expensive but, in my view, it will be challenging to make such an approach cost effective.’