Nasa turns to the dark side

Nasa scientists have embraced the dark side, creating the blackest material ever. It absorbs almost all light across multiple wavelengths and promises to open new frontiers in space technology.

The material absorbs more than 99.5 per cent of UV and visible light, dipping to 98 per cent in longer or far-infrared bands. This makes it ideal for suppressing stray light which can contaminate measurements of bright objects or overwhelm observations of dim objects far out in space. 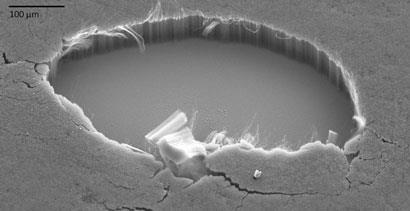 Nasa satellite engineers currently apply black paint to baffles and other components to help minimise stray light ricocheting off surfaces, but these paints only absorb around 90 per cent of this light. In addition, the paints are loaded with metals adding unwanted weight to satellites.

The new coating is far less dense. It is made of a thin layer of multi-walled carbon nanotubes positioned vertically like the pile in a carpet. The light weakly interacts at the interface between air (or vacuum) and the nanotube mat because the density of the nanotubes is very low. It is the low density that makes nanotube mat less reflective than elemental carbon which is black but shiny. As a result, as light passes into the nanotube forest it interacts with the carbon in the nanotubes by either being absorbed or, if the angle is correct, reflected deeper into the forest. ’The property that allows this broad band absorption by the carbon is the pi-electron structure in the nanotubes,’ Hagopian says.

The nanotubes were grown on silicon nitride, titanium and stainless steel, which are all commonly used in space-based scientific instruments. Hagopian says that they have subjected the coatings to forces of 100 g without any loss of the nanotubes.

Stephen Pompea, a scientist at the National Optical Astronomy Observatory in Tucson, says it has impressive optical characteristics. ’Such a highly-absorbing surface may make it particularly valuable for suppression of stray light in future space telescopes. The team will still have some challenges in ensuring that the coating can be applied to a variety of substrates,’ Pompea adds. ’They will also need to demonstrate that it is durable enough to withstand the vibration of a launch into space as well as to withstand the space environment for long periods of time.’