The whitest white paint ever is also the coolest 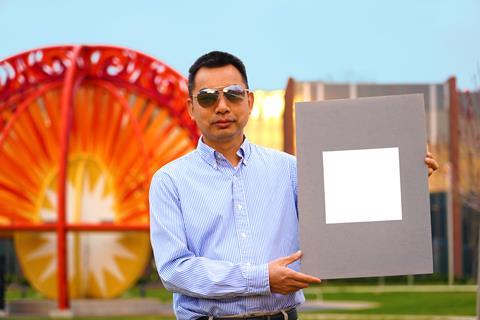 The world’s whitest white paint has been created by improving upon the formulation of an ultra-white paint developed by researchers at Purdue University in Indiana in October. The formulation could provide a cheap way to cool buildings by simply painting their roofs.

The new paint’s extreme whiteness is due to very high levels of barium sulfate, which is also a key ingredient in photographic paper and cosmetics. It appears to be the nearest white counterpart to Vantablack, which is one of the blackest substances known and was developed in 2014 by UK-based Surrey NanoSystems. The barium sulfate particles in the product are all different sizes, and that gives it the broadest spectrum scattering of light and contributes to its high reflectance.

The new white paint reflects up to 98.1% of sunlight, which is a significant improvement over the 95.5% reflected by the team’s one created last year. The previous paint the team made was a formulation based on calcium carbonate. By comparison, Vantablack – a class of super-black coatings – absorbs up to 99.9% of visible light.

The new white paint also keeps surfaces cooler than its previous iteration, and the scientists say that coating residential and commercial buildings with the product would reduce the need for air conditioning.

Corresponding author Xiulin Ruan, a mechanical engineering professor at Purdue, says the new technology might be most attractive for hot, poorer areas where air conditioning isn’t widely available, such as India and Africa. He estimates, for example, that if a roof of about 90m2 was coated with the new paint formulation it would result in typical cooling of 10kW. That is more powerful than typical home central air conditioners. 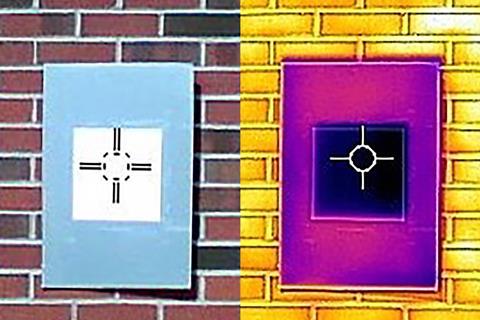 An infrared camera shows how a sample of the whitest white paint (the dark purple square in the middle) actually cools the board below ambient temperature, something that not even commercial ’heat rejecting’ paints do

In field tests in spring in Indiana, the Purdue team found that its paint kept surfaces 10.5°C cooler than their ambient surroundings at night, and during midday it kept surfaces 4.5°C cooler. By contrast, a commercial white paint increased surface temperatures by 6.8°C.

The coating’s cooling effect does, however, work during the winter too. In outdoor tests with an ambient temperature of 6°C, the researchers demonstrated that the paint lowered the sample temperature by as much as 10°C.

The majority of white paints on the market use titanium oxide as a filler, and reflect 80–90% of sunlight. ‘That means these products absorbs 10–20% of sunlight,’ Ruan explains. ‘We looked at the available white commercial paints to see what we could do differently, and wanted to come out with a better nanotechnology.’ The final product is the result of six years of work to create a radiative cooling paint.

Patent applications for this paint formulation have been filed, and Ruan says further testing is needed, but it could be on the market in a year or two. He notes that barium sulfate is slightly cheaper than titanium oxide, so the cost should be similar to that of traditional white paints.

The Purdue team has not created a new pigment. The chemistry of barium sulfate as a white pigment has been understood since the 18th century, emphasises Oregon State University chemist and materials science professor Mas Subramanian, who was not involved in the research. ‘Barium sulfate has been known for centuries, but they adjusted the particle size and created a microstructure that would reflect heat better,’ he tells Chemistry World. ‘It is not necessarily a breakthrough, but it is a significant advancement in reflective coating technology.’

David Darling, the vice president of health, safety and environmental affairs at the American Coatings Association, also points out that environmental, health and safety issues related to such a coating would need to be considered before bringing it to market.