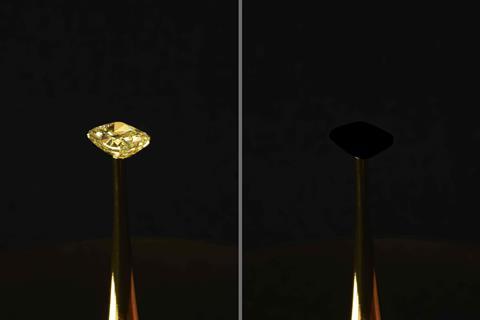 The Redemption of Vanity, is a work of art by Massachusetts Institute of Technology artist in residence Diemut Strebe that has been realised together with Brian Wardle, a professor of aeronautics and astronautics, whose team created the ultra-black material

A new material that is 10 times blacker than anything else previously reported has been created from carbon nanotubes and aluminium foil. The coating was unveiled at the New York Stock Exchange last week as part of an art exhibit entitled ‘The Redemption of Vanity’.

Kehang Cui and Brian Wardle from the Massachusetts Institute of Technology created the material while the pair were searching for new ways to grow carbon nanotubes (CNTs) on electrically conducting materials to improve their electrical and thermal properties. One of the conductors they tested was aluminium, but they encountered problems with the insulating oxide that built up on the surface of the metal when in air. To get around the issue, they treated the aluminium with salt water, depositing chloride ions on the surface that ate away the oxide.

The resulting surface was then used to grow vertically aligned CNTs, creating a material with greatly enhanced electrical and thermal properties. However, the pair also noticed how black the material was, and decided to test its optical reflectance. They found that their material absorbed 99.995% of incoming light at any angle, making it the new record holder for ‘blackest black’ by a substantial margin.

The exact mechanism by which the surface absorbs light is unclear, but the team have theorised it involves the vertical CNTs trapping the vast majority of the light and converting it into heat. As only a very small fraction of light is reflected, the material appears perfectly black to our eyes.

To illustrate the material’s light absorption, the researchers teamed up with artist Diemut Strebe to make a 16.78 carat yellow diamond, valued at $2 million (£1.6 million), ‘disappear’. When coated with the foil, the features of the cut diamond become indistinguishable from the overall shape and, against a dark background, the diamond becomes completely invisible.

Beyond artistic endeavours, the material may be useful as optical blinders for space telescopes to cut unwanted glare.