At a meeting in Rwanda, world leaders have agreed controls on hydrofluorocarbon (HFC) consumption and production that could potentially help avoid over 0.4˚C of global warming.

‘Adopting an ambitious amendment to phase down the use and production of HFCs is likely the single most important step that we could take at this moment to limit the warming of our planet and protect the planet for future generations,’ US Secretary of State John Kerry told the plenary session in Kigali. 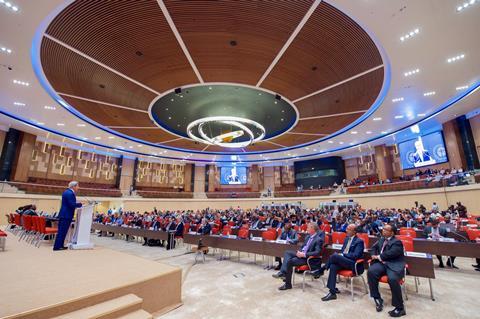 Source: © US Department of State

Yet countries fearful of the impact to their economic growth, including India, Saudi Arabia, and Pakistan, negotiated significant concessions as talks went on through the night after Kerry’s address. These ten nations aim to have eliminated 85% of HFC production and consumption by 2047, whereas developed countries are aiming to complete their 85% reduction by 2036. However, Avipsa Mahapatra, US climate campaign lead for the non-profit Environmental Investigation Agency in Washington, DC, points out that only having a few laggard countries ‘is a big win’.

With applications including air conditioning, refrigeration and insulating foams, HFCs are the world’s fastest growing greenhouse gases, with emissions rising by up to 10% per year. Although Mahapatra feels the agreement could have been more ambitious, she says it’s a strong signal for manufacturers of refrigerant, air conditioning and other products to rein back HFC use. ‘When companies see an international deal that makes an entire class of gases obsolete then they move in a certain direction,’ she says.

HFCs could contribute 0.3–0.5˚C to the global average surface temperature in 2100

Reflecting the fact that HFCs were introduced to replace ozone-damaging chlororfluorocarbons (CFCs), the new measures will be enforced under the Montreal Protocol on Substances that Deplete the Ozone Layer. The Montreal Protocol is ‘a mandatory treaty that has a history of always delivering what it promises’, stresses Durwood Zaelke, president of the Institute for Governance and Sustainable Development in Washington, DC. This makes international action easier than with other greenhouse gases. Dealing with HFCs is also desirable because each HFC molecule traps up to 12,000 times more heat in Earth’s atmosphere than a carbon dioxide molecule.

In the ‘Kigali amendment’, as the new deal is known, emissions will progressively reduce between 2020 and 2050. The reduction will prevent HFCs equivalent to 70–80 billion tonnes of CO 2 from entering the atmosphere over the next 35 years. That’s comparable to the emissions of nearly 500 million cars or knocking out the entire planet’s fossil fuel CO 2 emissions for more than two years.

‘Under a business-as-usual scenario HFCs could contribute 0.3–0.5˚C to the global average surface temperature in 2100,’ says Guus Velders from the Netherlands’ National Institute for Public Health and the Environment, RIVM. ‘With the agreement their contribution is projected to be reduced to 0.06˚C in 2100.’

Developed countries will lead the way in the deal, having already frozen HFC consumption at a baseline of the average of emissions from 2011–2013. China, Brazil, South Africa, Argentina, and more than 100 other developing countries committed to freeze their HFC production and use by 2024, and progressively ‘phase down’ from their 2020–2022 average emissions baseline. The smaller third group will set its baseline in 2024–2026, freezing growth and phasing down from 2028.

Enabling this effort, manufacturers like Mexichem Fluor, whose Runcorn, UK, site led the development of HFCs in the 1990s when it was part of ICI, are pushing for HFCs to be replaced by hydrofluoroolefins (HFOs). While these do not destroy ozone or cause climate change, some automobile manufacturers have expressed concern about their flammability and potential to degrade into hydrogen fluoride. Volkswagen, for example, has instead opted for using carbon dioxide as an air-conditioning refrigerant.