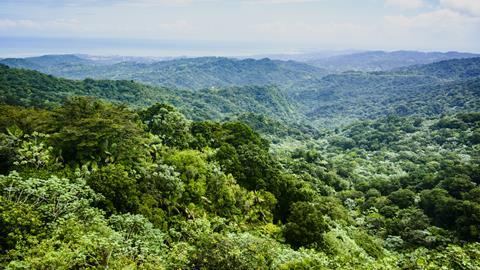 The growth rate of the potent greenhouse gas carbon dioxide in the atmosphere has remained constant between 2002 and 2014 despite emissions from human activity steadily increasing over the same period, according to an international study. The researchers concluded that the reason for this is that uptake of carbon dioxide by land-based vegetation, which acts as a carbon sink, has increased thereby reducing the proportion of anthropogenic emissions that remain in the atmosphere. ‘All together this means that plants and microbes on the land surface are acting to slow the rate of climate change,’ suggests lead author Trevor Keenan at the Lawrence Berkeley National Lab in California, US. 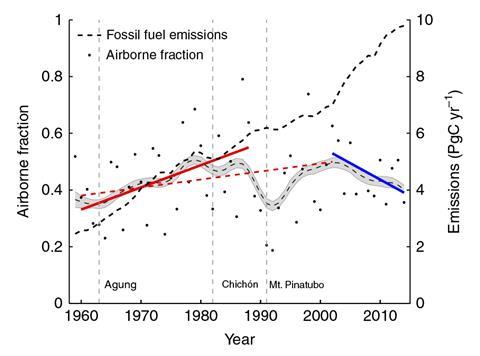 Fossil fuel emissions (black dashed line) have been increasing throughout the 20th century and beyond. The fraction of carbon dioxide that has remained in the atmosphere (black dots) has been more variable and the red line shows an increase in atmospheric concentrations from 1959-1998 and the blue line showing a decrease from 2002-2014

Previously, scientists thought that the growth rate of atmospheric carbon dioxide would increase in line with growing anthropogenic carbon emissions. But after analysing global carbon budget estimates, Keenan and his colleagues in Australia, the UK and China noticed that the atmospheric carbon dioxide growth rate was not keeping track with human emissions. To account for this, the team considered there was an unexpected change in the terrestrial carbon sink.

We cannot afford major erosion of these huge sinks for carbon

To work out what was going on, the researchers used a suite of models of the Earth’s surface, satellite analysis of vegetation cover, remote sensing and ground observations to understand the temporal dynamics of the terrestrial land sink. This revealed that the land sink is growing faster than previously expected. The team concluded that the most likely explanation for this is that rising carbon dioxide emissions are promoting photosynthesis and plant growth, combined with temperatures rising more slowly over vegetated areas over the past decade, which has reduced the carbon dioxide emitted by plants in these ecosystems.

The upshot is that the land sink is currently slowing the rate of climate change, says the team. But Keenan urges caution. ‘We still don’t fully understand the processes involved, and do not have a predictive understanding sufficient to say whether the increase in the land sink is likely to continue in the future,’ he explains. ‘Our results show the potential of the land sink, and highlight how important accurate predictions of how it will evolve in the coming decades are to meeting climate mitigation goals.’

’This elegant study underlines the importance of global carbon sinks, such as forests, in buffering the impact of fossil fuel CO2emissions on the atmosphere,’ says David Reay, who investigates climate change at the University of Edinburgh, UK. ‘A stark message here is that we cannot afford major erosion of these huge sinks for carbon, via climatic warming and land use change, if we are to successfully tackle climate change. Without their help our already herculean task of avoiding dangerous climate change becomes an impossible one.’