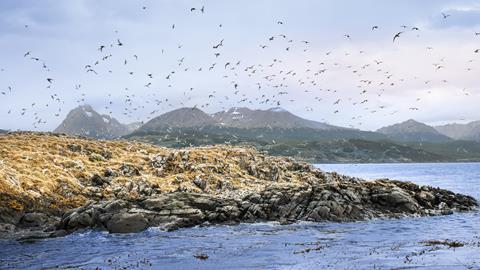 Ammonia emissions from guano contribute to the formation of clouds

Atmospheric chemists in Canada have shown that seabirds in the Arctic could be having a cooling effect on the climate, as ammonia from their droppings contributes to the formation of clouds that reflect solar radiation.

Tens of millions of birds breed and nest in the Arctic region, and an estimated 40,000 tonnes of ammonia are released every year as a result of bacteria breaking down their droppings. The ammonia combines with sulfuric acid and other organic vapours in the atmosphere to form particles which act as seeds for the formation of clouds.

Scientists at Dalhousie University and the University of Toronto quantified the cooling effects of seabird excrement by combining measurements of atmospheric ammonia and particles in the Canadian Arctic Archipelago region with mathematical models. Their calculations suggested ammonia emissions from bird colonies in some parts of the Arctic could have significant cooling effects of up to 1W/m2 during the summer breeding season. They warn that changes to the behaviour and migration patterns of these birds driven by climate change could have unforeseen consequences for regional patterns of cloud formation in the Arctic.