New explosive is powerful but greener than most 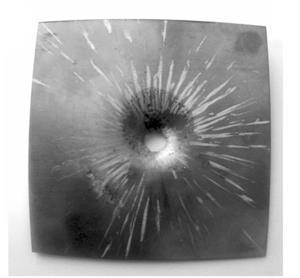 One of the most powerful non-nuclear explosives to date has been synthesized by scientists in Germany, who say the compound, and its more thermally stable potassium salt, could be more environmentally benign replacements for some common primary explosives.

Industrial and military explosive devices traditionally contain a primary explosive mixture, which can be triggered very easily by an impact or electric spark, to detonate a secondary explosive, which has a very high energy density but is more stable. For safety, the two are kept separate during transportation and storage. A common ingredient of primary explosives, tetracene, is unsuitable for many applications because it decomposes at around 115°C and its crystal structure contains water, which reacts with metal ions in many other explosives. Many of the alternatives contain toxic heavy metals such as lead.

Based on the properties of related compounds, 1,5-di(nitramino)tetrazole had been predicted theoretically to have both extremely high energy density and high sensitivity, but repeated attempts to produce it had failed. Now, a group at Ludwig Maximilian University in Munich have successfully produced the compound in a multi-step synthesis starting from industrially available chemicals such as dimethylcarbonate and hydrazine hydrate, and confirmed its extreme power and sensitivity – an impact of 1J is sufficient to detonate it.  Unfortunately, it decomposes at 110°C. The compound’s potassium salt, however, is thermally stable to 240°C, although it is a slightly less powerful explosive. 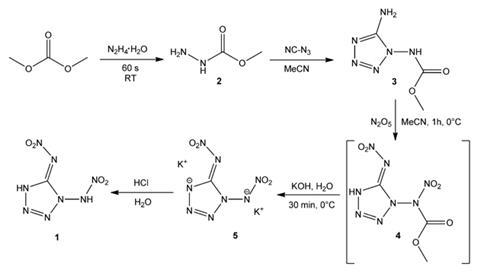 The team synthesised 1,5-di(nitramino)tetrazole and its potassium salts

The researchers demonstrated that just 50mg of the potassium salt could detonate the common high explosive RDX, which they say makes it an ideal primary explosive in applications such as pistols and other munitions where ignition occurs by an impact shock. The team are currently investigating their compounds’ toxicities, but team member Jörg Stierstorfer says that they expect them to be less toxic than many other explosives because of their high nitrogen content – which means the main product of detonation will be N2 – as well their high polarity (which should prevent the compounds dissolving and accumulating in body fat) and the complete absence of heavy metals.

Tore Brinck of the Royal Institute of Technology in Stockholm agrees that the compounds look promising, but he says more concrete data are needed to confirm that they are truly less toxic than those they seek to replace, and that they are suitable and industrially viable replacements. Until then, he says, they are, ‘an interesting scientific discovery, but it’s uncertain whether they’re going to find any applied use’.