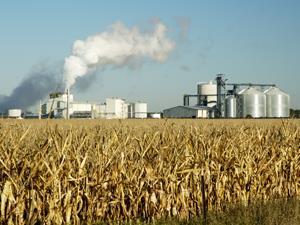 A new chemical reaction that converts waste glycerol from biodiesel production into methanol – a necessary reagent in biodiesel production – has been discovered unexpectedly by UK researchers. The work, which is still at a preliminary stage, could theoretically allow biodiesel to be produced entirely from renewable resources, cutting the need for fossil fuel based methanol.

In the transesterification process of biodiesel production, the carbon chain of a molecule of vegetable oil is broken into three. At each break, a hydrogen atom from methanol is substituted for the link to the adjacent carbon atom. The production of biodiesel, however, leads to the formation of large quantities of crude glycerol – around 10% of the mass of biodiesel created – but is generally uneconomical to refine. Researchers are seeking ways to convert this waste product into something useful, and some efforts have focused on the dehydration reaction to acrolein – used as a herbicide and polymer precursor. This reaction is usually acid-catalysed, but researchers at Cardiff University considered that it could also be base-catalysed and investigated this using magnesium oxide. Much to their surprise, they found that the main product was not acrolein but methanol: 'We made [lead author Muhammad Haider] do an awful lot of experiments to convince us that this was real!' says principal investigator Graham Hutchings of Cardiff University. 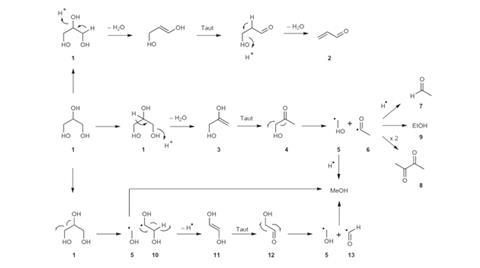 The proposed mechanism for methanol formation from glycerol

As a result of these experiments, which included isotopic labelling of reactants, the researchers determined that the glycerol was being reduced back to methanol by carbon–carbon bond scission and reduction using water as a hydrogen source. They hypothesise that the reaction can take place by either of two mechanisms: the first begins with double dehydration to acrolein and the second proceeds via the ethylene glycol radical and hydroxyethanal. 'It's a new chemistry, which has never been discussed in the literature before,' says Haider. Further investigations showed that cerium dioxide was a more effective catalyst than magnesium oxide, achieving complete conversion with methanol selectivity of 60%. The work is still at an early stage but, in principle, Haider says they 'have closed the sustainability loop for the transesterification process of biodiesel'.

Catalysis chemist Edman Tsang of the University of Oxford describes the result as 'a bit of a shock'. The accumulation of glycerol in biodiesel production 'is an environmental problem', he says, and groups including his own are investigating various ways to solve it. 'This looks like a very simple and straightforward way.' He cautions, however, that the long-term stability of the catalyst needs investigation, and worries that the large number of different minor products could make purification of the methanol expensive.