New analysis finds PIs funded by US National Institutes of Health grew steadily from 1985 to around 2010, but has since dropped steeply 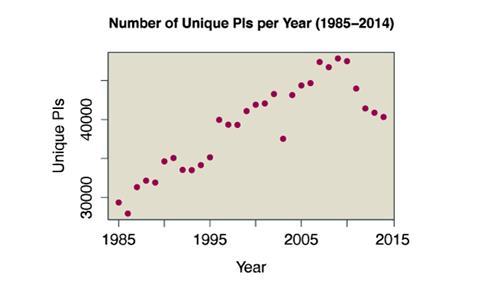 A former senior leader at the US National Institutes of Health (NIH) has found what he calls a ‘startling’ decline in the number of principal investigators (PIs) funded by the agency from between 2010 and the present day. Jeremy Berganalysed the agency’s grant data and concluded that the number of NIH-funded unique contact PIs grew almost linearly from 1985 to about 2010 to reach about 47,000, but then dropped sharply from 2010 to 2014 to just under 40,000. Interestingly, when he included all PIs rather than just PIs listed as a point of contact, the magnitude of the drop decreased, falling from nearly 50,000 in 2010 to about 44,000 in 2014.

Berg, who served as the director of the NIH’s basic science institute for more than seven years and is now an associate senior vice chancellor at the University of Pittsburgh in Pennsylvania, US, says he is ‘stunned at how remarkable the retreat was’. After looking at the NIH’s grant data, Berg says the curves he found clearly reveal the impact of the NIH budget doubling from fiscal years 1998 to 2003, and the subsequent decline due to the agency’s ‘worse-than-flat budget’ over the past 12 years. However, he notes that the economic stimulus package enacted by President Obama in February 2009 did benefit NIH and other science agencies in 2009 and 2010.

Meanwhile, Berg says the NIH’s own internal data analysis efforts have been somewhat limited. ‘The sort of thing which NIH hasn’t done very much of is this longitudinal examination of how investigators fare over time, as opposed to looking at the success rates for all grant applications in a given year,’ he tells Chemistry World. Berg says the PI demographics must be elucidated in order to better understand the problem. For example, he suggests that young scientists simply might not be coming into the system as quickly as before, or more established and seasoned researchers could be retiring at a faster rate, and also mid-career scientists might be getting forced out due to a lack of funding. Most likely, Berg says, the drop results from a combination of all of three of these factors.

The conventional wisdom is that mid-career researchers are hit hardest by the current relatively flat funding environment. ‘The really senior people who are well-established seem to be doing pretty well, and there are efforts to help new investigators,’ Berg explains. ‘But, those who are one or two grant cycles into their career are more vulnerable,’ he warns. More detailed scrutiny of the data is needed because Berg’s analysis took into account all the NIH’s grant mechanisms, which he says is akin to comparing apples and oranges. Berg is currently working on separating the data so that he can examine specific NIH grant mechanisms.