No methane on Mars, says Curiosity 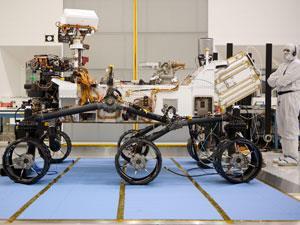 Curiosity being kitted out

The idea that there was life on Mars has been dealt a blow after analysis of the planet’s atmosphere found little to no methane. Despite reports of hotspots and plumes of methane in the past, no methane has been found by Curiosity, Nasa’s Mars rover.

Curiosity is equipped with various instruments to help scientists assess whether the planet was ever habitable. To do this the rover gulped down the Martian air at its research site in the Gale Crater and used a tunable laser spectrometer to look for methane and carbon dioxide. Methane is of special interest as it can be both a precoursor to, and product of, life.

In the next few weeks Curiosity will start taking soil and rock samples and subjecting them to gas chromatography to search for other organic compounds, as well as water bearing minerals. But for now, it seems there’s little evidence for there ever being little green men on Mars.