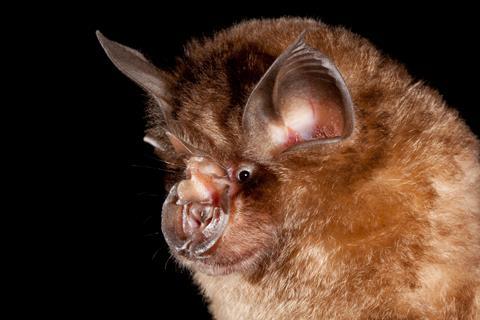 A horseshoe bat, which may be a natural reservoir of the coronavirus that causes Covid-19

The US scientific community is rebelling against a recent decision to abruptly cancel – apparently under political pressure – a grant for joint US–China research on bat-borne coronaviruses and their potential to transmit to humans. The award was shared by a health institute in New York and the Wuhan Institute of Virology, which has been at the centre of unfounded claims that the virus that caused the pandemic escaped from its laboratories.

Seventy-seven US science Nobel laureates sent a letter to the director of the National Institutes of Health (NIH), Francis Collins, and its parent agency on 21 May saying that they are ‘gravely concerned’ about the abrupt termination of the grant awarded to Peter Daszak at the EcoHealth Alliance in New York in late April. The project, originally funded by the Obama administration with a $3.7 million (£3 million) grant, had attracted the public ire of President Trump and some Republican lawmakers shortly before it was ended.

The letter opposing the award’s cancellation is signed by more than 20 chemistry Nobel laureate – including Peter Agre, who shared the 2003 award and is a former president of the American Association for the Advancement of Science, and Frances Arnold, who received the award in 2018 and is one of the most recent winners who signed on. Other notable laureates who put their names on the letter are former NIH director Harold Varmus, who won the award in physiology or medicine in 1989, and the ex-head of the US Department of Energy, Steven Chu, who received the physics prize in 1997.

The Nobelists state that Daszak and his colleagues have been conducting ‘highly regarded’, NIH-supported research on coronaviruses and other infectious agents for decades, focusing on the transmission of these viruses from animal hosts to human beings. They warn that ending funding for the research project ‘sets a dangerous precedent by interfering in the conduct of science and jeopardises public trust in the process of awarding federal funds for research’. They also note that the grant is particularly relevant to the current Covid-19 pandemic and received a ‘very high’ priority score during peer review when it came up for renewal.

Further, the laureates urge the NIH and the Department of Health and Human Services to act quickly to conduct and release a ‘thorough review’ of the actions that led to the decision to terminate the grant in question. They also request that the leaders of the two agencies ‘take appropriate steps to rectify the injustices that may have been committed’ in revoking the award.

Meanwhile, 31 scientific societies have also wrote to NIH director Collins expressing similar concerns. ‘We … are alarmed by the National Institutes of Health’s revocation of a peer-reviewed research grant for studies of coronaviruses by EcoHealth Alliance,’ reads the letter, spearheaded by the American Society for Biochemistry and Molecular Biology. ‘Not only is this decision counterintuitive, given the urgent need to better understand the virus that causes Covid-19 and identify drugs that will save lives, but it politicises science at a time when, if we are to stamp out this scourge, we need the public to trust experts and to take collective action.’

The science groups call on the NIH to be transparent about its decision-making process on this matter, and they conclude that the agency’s action ‘must be immediately reconsidered’.