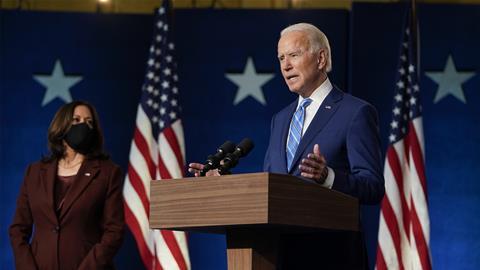 Former vice president Joe Biden will be the next US president, a result which has brought palpable relief across America’s research community. While vote counting continues in a handful of states and recounts are expected in some of them, Biden has secured enough Electoral College votes to win the election. President Donald Trump will depart the White House on 20 January.

‘It is a very good thing, and very promising,’ says Glenn Ruskin, a spokesperson for the American Chemical Society (ACS). ‘The current president has demonstrated, through the budget proposals that he has submitted to Congress and other actions, that he is not supportive of science,’ Ruskin continues. ‘Now you have a new president who comes in who has publicly said how much he values science … that bodes very well.’

Trump’s most recent budget request proposed cutting funding for the National Science Foundation (NSF) and the National Institutes of Health (NIH) by 6% each, decreasing the Department of Energy’s Office of Science by 17%, and slashing the Environmental Protection Agency’s science and technology account by 32%, according to analysis by the American Association for the Advancement of Science (AAAS). During Trump’s presidency, Congress has repeatedly rejected these funding cuts.

‘Biden has campaigned as the pro-science candidate who listens to the doctors and the scientists, and he is coming in with a public persona and statements that have him on the side of the research community,’ Derek Lowe, a drug discovery chemist and former registered Republican, tells Chemistry World. ‘Politically, that makes it even harder for him not to fund research generously.’

Lowe says he and his wife were prepared to move to Costa Rica or New Zealand if Trump had won another four years at the White House.

Under his Innovate in America agenda, Biden has proposed a $300 billion (£232 billion) investment over four years in R&D and ‘breakthrough technologies’. It also calls for ‘major increases’ in R&D spending, including for the NSF, NIH and other grant programmes that fund university researchers. Biden has also publicly suggested that the US government should be ‘doubling and tripling down’ on its investment in ‘pure research across the board’.

Although Biden has made clear his interest in boosting funding for research, this could prove difficult given Republicans appear poised to retain control of the Senate.

The US budget deficit recently hit over $3 trillion – more than triple last year’s figure of and double the prior record of $1.4 trillion during the 2009 recession. This means that it is quite possible that science agency funding will continue to grow but will be checked by congressional concerns about spending. This was a scenario faced by former president Obama, whose generous annual budget requests for research agencies were stymied by a divided and uncooperative Congress.

‘While there seems to be bipartisan support for science funding in Congress, Republicans are talking about the big US deficit and rising debt, and that noise is just going to get louder,’ says Neal Lane, a physicist who served as science adviser to former president Bill Clinton and as director of the NSF .

‘That is going to put pressure on the new administration and the Congress, especially on fiscal hawks, to constrain federal spending levels,’ says Joanne Carney, who directs government relations for the AAAS.

Another expectation is that Biden, once inaugurated in January, will fairly quickly reverse many of Trump’s actions that have concerned the scientific community. These include Trump’s withdrawal from the Paris Agreement on climate change and move to exit the World Health Organization, effective July 2021. The US formally left the Paris accord on 4 November, the day after the election.

It is also anticipated that Biden will use executive orders and the appointments of new agency directors and scientific panel members to undo other steps Trump has taken that have worried many scientists. ‘The Trump administration has reversed environmental regulations, stacked science advisory committees, ignored science advisers and replaced many heads of science agencies with unqualified people who have been lobbyists,’ says Lane. ‘We would all be relieved that these kinds of things that have been going on will not happen under Biden – he’s not going to put unqualified people in charge of research agencies or on science advisory committees, and will listen to his science advisers.’

From the start of his presidency, Trump has been accused of downplaying science’s role in policymaking. The president faced repeated criticism for his treatment of America’s foremost infectious diseases expert, Anthony Fauci, as Covid-19 swept the US. Fauci, who has advised six US presidents and was a leader of the White House’s coronavirus task force, has sometimes refuted Trump’s inaccurate statements and contradicted his message that the pandemic is under control. At a recent rally in Florida, Trump indicated that he planned to fire Fauci after the election. Biden lambasted the president for that comment, saying: ‘I got a better idea. Elect me and I’m gonna hire Dr Fauci and we’re gonna fire Donald Trump.’

Biden is also expected to reverse Trump’s immigration policies that have posed serious challenges for universities looking to recruit overseas students and talent. Ruskin anticipates that Biden will undo several of Trump’s recent executive orders, including one that restricts non-immigrant student visas. ‘All of these directives taken in concert are not good for the country at large or for the scientific enterprise, really making it difficult for us to have the requisite talent for our innovation pipeline,’ Ruskin says.

Other observers agree. ‘All of these restrictions on the number of students who can enter the country and the pathways to permanent residency – I expect that to be rolled back immediately,’ Lowe says.

Biden has spoken out against these immigration policies a number of times, and has proposed that foreign graduates of US doctoral programmes should automatically receive a green card with their degree.