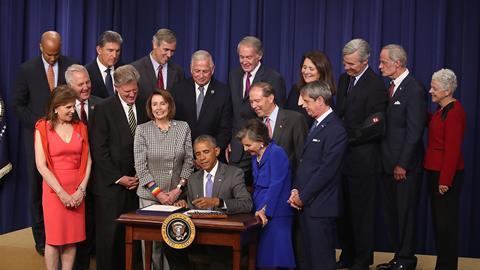 The 40-year-old law that regulates new and existing chemicals in the US has finally been reformed. President Obama signed the new law to update the Toxic Substances Control Act (TSCA) yesterday, more than two weeks after it passed the Senate by unanimous consent, and almost a month after being overwhelmingly approved by the House of Representatives.

During the signing ceremony, Obama said TSCA didn’t work properly in practice. ‘In 1976, some 62,000 chemicals were already on the market, but the law placed demands on the [Environmental Protection Agency (EPA)] that were so tough, so onerous, that it became virtually impossible to actually see if those chemicals were harming anybody,’ the president stated. In fact, out of those original 62,000 chemicals, he confirmed that only a ‘tiny percentage’ has even been reviewed, and only five have been banned.

‘This system was so complex, it was so burdensome, that our country hasn’t even been able to uphold a ban on asbestos – a known carcinogen that kills as many as 10,000 Americans every year,’ Obama said. The updated TSCA will make it easier for the EPA to review chemicals, the president explained. ‘For the first time in our history, we will actually be able to regulate chemicals effectively,’ he said. ‘It will do away with an outdated bureaucratic formula to evaluate safety, and instead focus solely on the risks to our health, and will finally grant our scientists and our public servants of the EPA the funding they need to get the job done and keep us safe – this is a big deal.’

Representatives of the chemical industry, as well as public health and environmental organisations backed the legislation and were present when it was signed into law. ‘This is proof that even in the current polarised political climate here in Washington, things can work – it is possible,’ Obama stated. ‘If we can get this bill done, it means that somewhere out there on the horizon we can make our politics less toxic as well.’