Older researchers crowding out younger ones 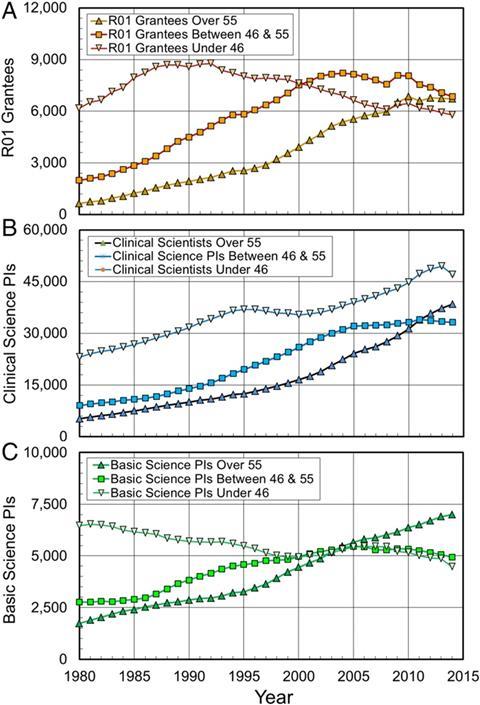 Source: Proceedings of the National Academy of Science, USA

When it comes to securing US National Institutes of Health (NIH) funding, the oldest researchers are crowding out their younger counterparts, according to a new analysis.

Over a 32-year period when funding for the NIH almost tripled, the fraction of basic science faculty who receive the bread-and-butter R01 grants from the agency dropped for younger principal investigators (PIs) who are under 46 years while increasing for those above 55 years.

The study’s authors, 2013 chemistry Nobel laureate Michael Levitt from Stanford University, and Jonathan Levitt from the University of Wolverhampton, conclude that this ‘age-related bias’ appears to have caused the steady drop in the number of young basic science PIs. They warn that this could reduce future US discoveries in fundamental biomedical science, since innovation historically happens when scientists are early in their careers.

‘As basic sciences contributed so much to US nobel prizes in medicine since 1950, new fundamental discoveries made by young PIs in the United States are vital for future breakthroughs in biomedicine,’ the authors write. They conclude that they ‘see no alternative’ but to increase the number of basic scientists younger than 46 years. Beyond recommending that the NIH reduce funding of older PIs in order to free up money for younger ones, the two brothers also suggest increasing fellowships that support the move from postdoc to group leader.

‘The paper has quantified what we already know – there is an ageing population of PIs and younger faculty are not getting their fair share of grant support,’ says Sandra Degen, the former vice president for research at the University of Cincinnati and professor emerita at the school. ‘When I started in 1985, I got an R01 when I was 32, and a few years ago the average starting age of an R01 grantee was 42 – so it has crept up – that is such a loss for innovative and creative young faculty,’ she tells Chemistry World.

Degen served on an NIH biomedical workforce working group that concluded in 2012 that ageing researchers were tying up funding that could help early and mid-career researchers. She agrees that new mechanisms are needed to either encourage more senior faculty to move on, or give them grants with less support, while programmes are also needed to move support to junior faculty. ‘You achieve a sort of level of fame, of glory, you made your discoveries, and hand the baton on to the next generation,’ she says.

Meanwhile, other experts in ageing and the biomedical workforce argue that the NIH alone cannot solve the problem of the underlying demographic shift. They note that the agency cannot give early career scientists independent R01 awards if they are not applying for them.