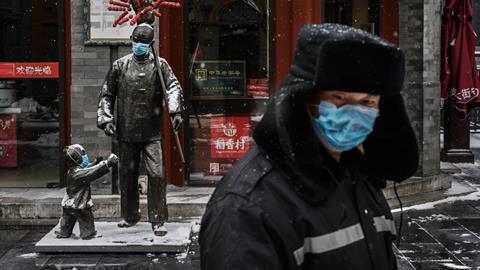 Genomics has been playing a critical role in global efforts to tackle the novel coronavirus outbreak, which has grown to be a public health emergency since it was first detected in Wuhan, China in December. Thanks to the work of researchers around the globe the virus’ genome has been sequenced rapidly, enabling the spread of the disease to be tracked.

So far, more than 2000 deaths have resulted from this novel coronavirus, dubbed SARS-CoV-2, out of nearly 47,000 laboratory-confirmed cases. These have almost all been in China. The US Centers for Disease Control (CDC) has reported 15 cases of the virus in America and no deaths, as of 19 February. The European Centre for Disease Prevention and Control said 45 cases of the Covid-19 illness had been reported in Europe with one death in France, as of 20 February.

Trevor Bedford, a computational biologist at Fred Hutchison Cancer Research Center in Seattle, and colleagues are using genetic sequencing to reconstruct the pathogen’s spread through Wuhan and then across China and on to other nations. They have been able to chart particular variants of SARS-CoV-2, and then reconstruct a family tree that shows how these mutations relate to one other. This phylogeny sheds significant light on the outbreak.

At the annual meeting of the American Association for the Advancement of Science (AAAS) in Seattle, Bedford recalled how researchers at Fudan University in Shanghai released the first SARS-CoV-2 genome on 10 January, which revealed it is a SARS-like betacoronavirus. The Chinese CDC quickly supplied four additional genomes of the virus. This genetic information allowed researchers to look at the early dynamics of the epidemic’s transmission, and the first thing that they saw was very little genetic diversity.

Three out of the five genomes were genetically identical, and the other two differed in only three places, some of which may have been sequencing errors.

‘This told us very quickly that these five cases are very closely linked,’ Bedford explained. Because coronaviruses generally have one or two mutations per genome per month, it was clear that all of these infections had a common origin in the previous two weeks to one month. ‘My original thought was, “This isn’t so scary … these five individuals came from the Wuhan market, they all were exposed to a similar source,”’ he recalled.

The picture changed, however, a few days later with the release of another two novel coronavirus genomes from travellers who fell ill in Bangkok in Thailand. Neither of these individuals had reported going to the Wuhan market, yet the virus isolated from them were genetically identical to the others. The situation quickly became more worrisome when an additional five subsequently released SARS-CoV-2 genomes still showed this lack of diversity.

‘This is for me when the other shoe dropped – I freaked out and realised there was this single introduction into the human population … between mid-November to mid-December, and that it had spread since then,’ Bedford recounted. He spent the week of 20 January alerting various public health officials, and has since then worked with colleagues to update Nextstrain – an open-source project to conduct real-time molecular epidemiology and evolutionary analysis of emerging epidemics.

The significant and coordinated international effort to address the spread of this virus is an indication of how seriously it is being taken by the scientific and public heath communities. ‘This is one of the most threatening outbreaks that I have seen in my career,’ Scott Dowell, an infectious diseases specialist with the Bill and Melinda Gates Foundation in Seattle, told the AAAS audience.

The AAAS estimated that dozens of Chinese scientists who had registered for the event, some of whom were speakers and presenters, were unable to attend due to coronavirus travel restrictions.

To determine how easily the virus is passed from person to person, researchers measure the average number of people that each case infects. An R0 of 1 means that the outbreak stays steady, and a number below that indicates that it is under control. For SARS-CoV-2, that number is around 2.5, Dowell said. ‘I have seen estimates that go up to 3 or 4, and as much as 5,’ he said. ‘So, there is no doubt that in the settings that this virus has been operating so far, this is a robustly transmitted human pathogen.’

There is real concern about how deadly the virus is, which can be calculated by dividing the number of deaths by the number of cases. ‘Yesterday’s numbers are 1369 deaths out of 46,997 lab-confirmed cases, which comes out to about 3% – worryingly high,’ Dowell said. The figure has crept up from a steady 2% earlier in the month, he noted.

However, it is likely that the numbers of deaths and cases are both an underestimate. At this stage of a rapidly expanding outbreak, the vast majority of cases are recent infections. ‘To put it bluntly, most people haven’t had time to die,’ Dowell said. He pointed out that the median time to death in the early fatality cases was 18 days.

Nevertheless, there is reason for cautious optimism. An examination of the 167 cases of infected individuals who travelled from China to elsewhere reveals that most of them fizzled out. Dowell said 147 did not infect anyone else, 20 were transmitting the disease briefly, while 13 of the clusters are still a concern. ‘Those sparks created little fires which are now growing, but that’s 20 out of 167 – roughly one out of eight sparks that led to a fire, and roughly one out of 12 that led to significant fires,’ he said.

One positive from this public health crisis is that researchers from around the world have participated in an impressive open data sharing campaign. Since 10 January, public health institutions, universities inside and outside of China, the Chinese CDC, provincial CDCs in China, the US CDC and universities around the world have publicly shared over 100 sequences of variants of SARS-CoV-2.

‘It’s worth noting just how different the scientific communication surrounding the outbreak has been,’ Bedford said. ‘Everything is now completely flipped – everything is being posted at bioRxiv, modelling groups are posting live analyses via GitHub and other mechanisms.’

He also addressed and debunked a potentially dangerous conspiracy theory that has emerged amid all of these preprints on the novel coronavirus. Bedford described one preprint posted to bioRxiv on 21 January that suggested that the SARS-CoV-2 might be an engineered virus as ‘rather terrible’. ‘I think it was from a non-malicious just confused group,’ he said. He added that the analysis was ‘wrong at many levels’, and noted that the preprint was quickly discredited by scientists and retracted.

At the AAAS conference, Bill Gates called the SARS-CoV-2 epidemic ‘a huge challenge’. A lot remains unknown about this outbreak, but the information that has emerged so far indicates that it is ‘a potentially very bad situation, particularly if is spreads to areas like Sub-Saharan Africa and southern Asia,’ Gates said.

Meanwhile, a potentially more serious health threat could be brewing. AAAS president Steven Chu warned that an outbreak of the deadly H5N1 avian flu virus had surfaced in China earlier this month. He pointed out that the H5N1 flu virus is far more deadly than SARS-CoV-2 and the 1918 pandemic killed roughly 3% to 6% of the world’s population – 50 to 100 million people. By comparison, he said, the coronavirus is not expected to cause more than 2000 or 3000 deaths globally.

‘If people catch [H5N1] they have a 60% chance of dying,’ Chu warned. ‘If it happens to jump into people where it then is transmittable by people in a sustained way, then you are in for a much more serious thing.’