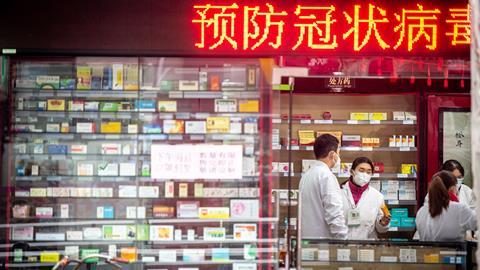 The race to fight coronavirus

When the Chinese government published the genetic sequence for novel coronavirus 2019-nCoV, Inovio Pharmaceuticals was waiting. ‘By [the next day] we had a vaccine made from the sequence,’ says Jeff Richardson, the Pennsylvania, US, company’s vice president of strategic relations. Inovio’s story reflects how concern over 2019-nCoV has started a race among companies to develop drugs, vaccines and tests.

Inovio’s speed is remarkable. Following its initial isolation in Wuhan, the Chinese Center for Disease Control and Prevention (CCDC) had identified 2019-nCoV by 7 January 2020. The sequence was released on 10 January. On 30 January, the World Health Organization (WHO) declared the outbreak a global emergency as it continues to spread to at least 24 countries outside of China. As of 11 February, over 43,000 people have been infected globally and 1018 have died of the disease, officially named COVID-19 by the WHO. China and other nearby countries have imposed significant containment controls and are restricting people’s movement. 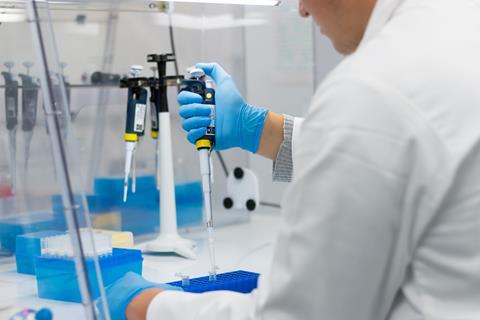 Government, university and commercial labs all over the world are working to develop tests and treatments for the nCoV-2019 virus

More people have now been infected in China than during the severe acute respiratory syndrome (Sars) coronavirus outbreak in the early 2000s. So far 2019-nCoV seems to be spreading faster but have a lower fatality rate than that outbreak. However, 2019-nCoV has already killed more people than the Middle East Respiratory Syndrome (Mers) outbreak that began in 2012, the most recent previous novel human coronavirus. Yet many details are still open to question that will be vital in determining whether it becomes as serious as the influenza outbreaks that kill hundreds of thousands of people per year worldwide. Nevertheless, authorities are already recognising that it’s too late to effectively contain the virus.

‘There are some indications that the virus can be spread from people who aren’t even showing symptoms,’ comments Kate Broderick, Inovio’s senior vice president for R&D. ‘Things like quarantine and isolation aren’t going to work, because you can’t intervene when somebody doesn’t appear to be sick.’ As such, Broderick says that 2019-nCoV ‘has hugely exceeded the need for a vaccine’. ‘The spread of the virus at the moment is particularly concerning,’ she says. ‘Having a vaccine to protect healthcare workers and target people we know are definitely at risk can be a critical tool.’

Coronaviruses have single-stranded RNA genomes wrapped in large protein envelopes. Everyone has experienced mild coronavirus infections as common colds, causing coughing and sneezing. Animals have their own coronaviruses, and sometimes one jumps into humans. 2019-nCoV is seemingly the latest example, thought to have originated in a Wuhan seafood market. Some patients rapidly develop viral pneumonia.

As such, diagnosing the disease is important, yet few tests are available. One of the first commercial offerings comes from Primerdesign in Southampton, UK. It can distinguish 2019-nCoV from other coronaviruses. The company believes this differentiates it from rival tests, which are less specific and may also react to other related species giving rise to a false positive diagnosis. 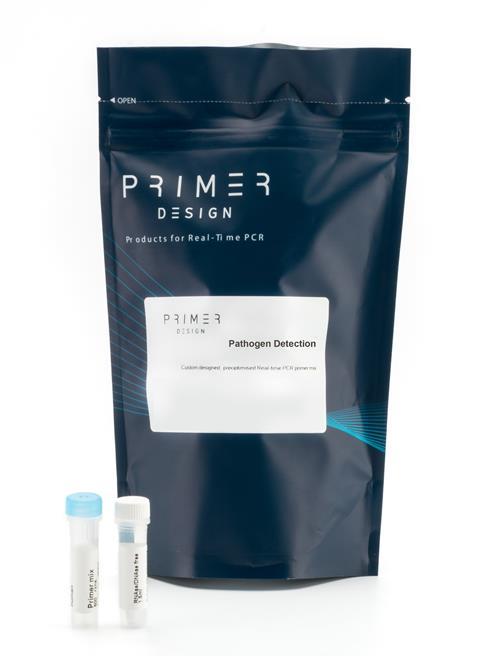 Primerdesign has developed a highly specific PCR-based test kit, but it can only be used for research

2019-nCoV tests currently rely on the polymerase chain reaction (PCR) to amplify its RNA genome to detectable levels. Adam Herridge, Primerdesign product manager, explains that his company’s tests include multiple primer oligonucleotide sequences that can bind to 2019-nCoV. These give polymerase enzymes somewhere to bind and start replication. The tests also include a specific probe sequence can bind to the 2019-nCoV genes. The probe has a fluorescent structure at one end, but doesn’t glow on its own because it’s quenched by a structure at the other end. ‘When you’ve got a specific sequence that’s designed to be complementary to your probe – the novel coronavirus in this instance – it’s cleaved by an enzyme that has an exonuclease activity,’ Herridge explains. Separated from the quencher, the fluorescent structure emits light. Used in quantitative PCR, the resulting fluorescence ‘can quantify the number of copies of virus that were input in your original sample’.

Like Richardson, Herridge stresses the importance of moving fast on 2019-nCoV. Primerdesign’s test is based on sequence information released on 23 January, and was developed in less than two weeks. The sequence information is more up-to-date than sequences used by other tests, Herridge asserts. ‘That allows ours to be more specific, whereas the previous ones had more general sequences that are present in a wider family of coronaviruses,’ he says.

In these circumstances, where the situation is so serious, the only path to a solution is us all working together

Yet Primerdesign states that its test is intended for research use only. The limited availability of clinical tests means that diagnosis relies heavily on a few central government and academic labs. The World Health Organization has identified 15 such laboratories to provide reference testing support, but is working with them and commercial organisations to strengthen diagnostic capability. For example, in the US 2019-nCoV had been diagnosed only at the country’s Centers for Disease Control and Prevention (CDC) labs. But on 4 February, the US Food and Drug Administration issued an emergency use authorisation to enable clinical use of the CDC’s 2019-nCoV real-time PCR diagnostic panel. The test can now be used at qualified labs outside the CDC.

Among such efforts in China, health authorities and the government have been working with Swiss-headquartered Roche to ensure people can get access to screening and healthcare. In a statement the company says that it is ‘working to support the government and local health officials and hospitals in Hubei Province in dealing with the coronavirus’. It is providing diagnostic tests, medical supplies and financial support for the affected region. Roche’s coronavirus diagnostic tests are also PCR-based.

Demand for Roche’s anti-flu medication Tamiflu (oseltamivir) has also forced Roche to stress in its statement that there are ‘currently no medicines to treat human coronaviruses’. ‘Roche medicines for the treatment of flu are designed to treat specific forms of flu viruses and it is extremely unlikely that they would be effective at treating the novel coronavirus,’ it says. Similarly, new antiviral small molecule drugs targeting coronaviruses would be almost impossible to develop in time to help with this outbreak. However, researchers are seeking to establish whether some existing drugs may be beneficial. For example, scientists in Wuhan, China, are using the HIV medicines lopinavir and ritonavir (sold together by US firm AbbVie as Kaletra) in a randomised, controlled trial.

Similarly US-headquartered multinational Johnson & Johnson (J&J) is donating its HIV medicines darunavir and cobicistat for investigational use in China to combat the novel coronavirus. ‘We believe we have a responsibility to step in and invest in solutions for global public health crises,’ says Hanneke Schuitemaker, global head of viral vaccines at Janssen (a J&J subsidiary). Yet J&J’s activities mostly reflect the fact that the chances for a more rapid response to 2019-nCoV come primarily down to a vaccine.

The company’s vaccine development will exploit various technologies to rapidly scale up vaccine production. Its AdVac adenovirus vectors ‘can induce potent and long-lasting immune responses, enabling us to pursue vaccines for disease targets that are currently unpreventable or untreatable,’ Schuitemaker explains. This combines with the PER.C6 cell line that it uses to manufacture a wide variety of vaccines, enabling ‘fast and high-capacity production of biological components’, she adds.

When the Zika outbreak occurred, we went from viral sequence to the clinic in seven months. We are aiming to do coronavirus considerably faster than that

Like other companies, Schuitemaker says that J&J moved rapidly when the 2019-nCoV sequence was released. ‘We have initiated efforts to develop a vaccine candidate against the virus, which we hope can ultimately be deployed quickly and extensively to help combat this outbreak,’ she says. ‘We are also collaborating with other partners to screen our library of antiviral molecules, to identify potential treatments for rigorous research and development. We hope we can create a candidate vaccine for this virus and can start a Phase 1 clinical study within approximately 8–12 months. We started the work quickly because we want to be prepared.’

Schuitemaker stresses that even if successful, such a product should not be seen as the entire solution. ‘Vaccines and/or antivirals, if approved, should be used in combination with public health measures as outlined by the CDC, including use of protective equipment for health care workers in hospitals,’ she explains. ‘What we have learned from past epidemics such as Sars, and ongoing epidemics such as Ebola, is that coordination as a global community is critical to effectively containing, or eventually preventing these types of outbreaks.’

Meanwhile, the Coalition for Epidemic Preparedness Innovations (CEPI) has initiated three programmes that should be well placed to develop vaccines against nCoV-2019. One is a new partnership in which CEPI will pay for US biotech firm Moderna to manufacture an mRNA-based vaccine developed by the US National Institute of Allergy and Infectious Diseases. The other two programmes will use rapid response platforms that CEPI already supports to advance nCoV-2019 vaccine candidates into clinical testing as quickly as possible.

In one, CEPI is paying the University of Queensland, Australia, up to $10.6 million to develop a vaccine platform that enables targeted and rapid vaccine production against multiple viral pathogens. The technology works by synthesising viral surface proteins, which attach to host cells during infection, and clamping them into shape. This makes it easier for the immune system to recognise them as the correct antigen, and was previously targeting Mers and flu. US-headquartered vaccine company Novavax is pursuing an nCoV-2019 product using a similar conformational stabilisation approach, delivering the proteins as nanoparticles, independently of CEPI.

The other platform that CEPI already supports is Inovio’s, with the rapid response to 2019-nCoV’s genetic sequence that Richardson outlines enabled by Inovio’s DNA Medicines platform. CEPI was already paying Inovio up to $56 million for vaccine candidates against Mers and Lassa fever using the technology, which delivers optimised synthetic antigenic genes into cells. Once inside, the cells translate the genes into protein antigens that activate a person’s immune system, stimulating targeted T cell and antibody responses. It’s easier to develop such vaccines fast, Richardson explains. That improves the chances that, even if this viral outbreak is seasonal, as is typical, they can develop a vaccine in time to help this season’s victims.

‘We have a track record of success of really rapidly responding to viral outbreaks,’ explains Broderick. ‘Three or so years ago, when the Zika outbreak occurred, we went from viral sequence to treating our first patient in the clinic in seven months. That was really an unprecedented speed. With this novel coronavirus development, we are aiming to do it considerably faster than that. It really puts us in a pivotal position, I believe, to respond to an outbreak like the one we’re seeing in China.’

Despite this confidence in being first to market, Broderick would welcome others delivering approved vaccines with similar speed. ‘I think in this sort of circumstance, where the situation is so serious, the only path to a solution is us all working together,’ she says. ‘Just getting a vaccine should be the goal of the scientific community.’