Origami tubes curl up with water

Inspired by Mimosa pudica’s leaves that recoil when touched, researchers have developed a material that spontaneously curls as soon as water touches it, forming origami tubes in a Mexican wave fashion. The simple and low-cost material could enable a new generation of non-electric fluidic devices where the material itself supplies the energy for applications including sensory fabrics, fog harvesters and artificial muscles. 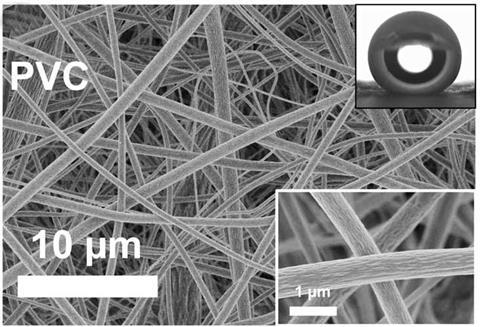 Thin polymer sheets have been wrapped around water droplets before, by using the energy on the surface of the water to allow the material to fold. But these materials could only assemble small structures of about 10mm around a droplet and not follow an assembly path to fold bigger shapes. The new material developed by a team in Australia and China gets beyond these limitations and can self-organise into a variety of centimetre long predetermined tubular shapes – including T-junctions, U-turns and curves – useful for microfluidic applications.

‘A major issue in many wearable and miniaturised devices is how to supply the energy required for actuation of pumps and other fluidics devices,’ says Antonio Tricoli at the Australian National University, Canberra, who led the research with Zuankai Wang at the City University of  Hong Kong, China. ‘Here, we have solved this problem by using the large energy density present on the surface of nanomaterials.’

Their nanostructured material has two layers: the top layer comprises millions of superhydrophillic polycaprolactone (PCL) nanofibres, while the bottom layer contains many superhydrophobic PVC microfibres. The resulting bilayer has an enormous surface area, and thus energy, which is very durable and flexible.

Experiments revealed that when one end of the material comes into contact with water it rapidly folds around the liquid to minimise its surface energy. The resulting capillary forces acting on its end propel the water along the strip causing it to immediately fold, which keeps the water moving ever onwards. This domino-effect of folding and water propulsion follows the main axis of the material and so different shapes can be made easily. When immersed in ethanol, the material returns to its original state.

‘It was almost like seeing a plant or a living tissue responding to a small stimulation with a significantly larger motion,’ says Tricoli. ‘When we first saw that such complex shapes could be created by simply placing a water droplet on these Janus sheets, we were very surprised. The most intriguing part is that the length of the self-assembly is theoretically unlimited and very large metres-long structures may be self-assembled in the future.’

Upon wetting, the material responded in milliseconds, which rivals that of Mimosa pudica and pneumatic devices – most previous responsive soft materials change shape on the order of seconds to minutes. ‘The speed of the response and the ease of fabrication are certainly a very significant step forward in the construction of mechanically responsive soft materials, and their use as actuators, for example in micromechanics, nanomedicine and robotics,’ comments Jan van Esch, who develops soft materials at Delft University of Technology, the Netherlands.