Do try this at home, urge researchers who have given nylon and polyethylene thread a similar power-to-weight ratio to a jet engine 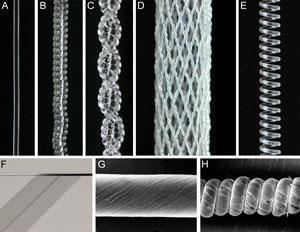 An international team has unmasked the hidden superpowers of humble sewing thread and fishing line. Twisting nylon and polyethylene into coils, they made artificial muscles that can lift loads over 100 times heavier than human muscle of the same length and weight.1 They could replace motors in many uses, particularly robotics, and enable new technologies, such as smart clothing, says Ray Baughman from the University of Texas, Dallas. He’s also excited that the threads used cost just $5/kg (£3/kg). ‘They could be easily deployed in the developing world, children could make and use them,’ he tells Chemistry World.

Baughman’s team previously made artificial muscles from twisted carbon nanotube yarns that expanded or contracted when electrical charge passed through them. But their yarns were expensive and could only make small muscles. Worse still, twisted muscles responded more powerfully than untwisted yarn, but they didn’t know why.

Nylon and polythene, by contrast, were cheap to investigate. In a thread these polymer chains line up lengthways, and contract in this direction when heated, while also expanding sideways. In coiled up threads, the two differing responses drive a twisting action that gives them their previously unrealised power. Baughman compares this to how metal springs move, their wire twisting when stretched or compressed, only in polymer coils the motion is temperature-driven. The coils expand or contract on heating depending on the direction they are spun in.

The many muscles the researchers made include four twisted polyethylene fishing lines in a silicone tube. Pumping alternating hot and cold water down the tube raises and lowers a 7.2kg weight twice a second. That shows these fibres avoid the hysteresis disadvantage seen in rival artificial muscle candidates, shape memory alloys, which creates a delay before movement.

Shape memory alloys also cost around £3000/kg, Baughman highlights, and are harder to scale-up.  ‘We’ve gone up to 1mm diameter,’ he says. ‘The smallest is 25µm, but there’s no reason why we can’t go to 1cm diameter muscle and have the same contraction energy per unit volume.’

Jonathan Rossiter, a biomimetics and robotics researcher at the University of Bristol, UK, says that the resulting versatility to generate large strains or stress is ‘very important’. He also applauds the ability they’ve shown to operate robustly over millions of cycles. ‘I expect this to lead to practical artificial muscles in a relatively short time, even within five years,’ he says. ‘The challenge lies in control of thermal energy into and out of the material.’

Danilo de Rossi, from the University of Pisa, Italy, who worked with Baughman on nanotube-based artificial muscles in 1999,2 is more cautious about the fibres’ potential. He suggests that electroactive elastomer artificial muscles being commercialised by California’s SRI International are more likely to be successful than heat-responsive ones. ‘It’s excellent optimisation, but how many thermally activated switches are used by industry?’ he asks. ‘Almost zero.’

But Baughman’s team have already exploited their muscles’ temperature response to replace motors that open and close windows to regulate building climate (see video). They’ve also woven prototype textiles from them that could let more air through clothes when it’s warm. Baughman also hopes they could help the elderly in lightweight exoskeletons that amplify weak movements, or companion robots.

‘When I was visiting collaborators in South Korea I met a beautiful woman,’ he recalls. ‘But she didn’t look attractive when I got close, because she was a humanoid robot, and didn’t have enough face muscles to smile naturally. With our small diameter polymer muscles, you can put as many as you want in a facial expression.’