Modern analysis of forgotten samples has given chemists in the US additional insights into the origins of life on Earth.

Stanley Miller became famous with a single experiment carried out during his PhD thesis with Harold Urey. The experiment simulated conditions in a sealed apparatus, which according to Urey’s previous work were believed to have predominated on the primeval Earth, including an ocean, a reducing atmosphere, and a spark discharge meant to simulate lightning. After only a few days, this experiment produced a rich mixture of organic molecules including some of the amino acids found in proteins today. 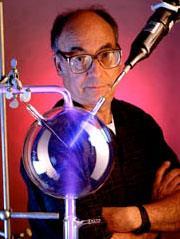 Over the next half-century, Miller continued to study prebiotic chemistry and possible origins of life in many variations but he never reached a definitive explanation of the origin of life.

Following Miller’s death in May 2007, his former student Jeffrey Bada, a geochemist at the University of California at San Diego, inherited the contents of Miller’s lab and office and discovered samples from 1958. The samples were clearly labelled and referenced in Miller’s lab notebook but never reported. Bada’s group has now analysed these samples using modern HPLC and mass spectrometry to gain two independent descriptions of their chemical composition.

The unreported (until now) 1958 experiment again involved a spark but the gas mixture included both reduced and oxidised substances and was the first experiment to contain hydrogen sulphide (H2S). Bada’s team found that the unreported samples contained a greater abundance and variety of biologically relevant molecules than Miller had reported in his 1950s studies. The samples also contained oxidation products of the sulfur-containing amino acids cysteine and methionine, which Miller didn’t report making until the 1970s.

While a gas mixture like the one Miller used in 1958 may not be representative of the Earth’s early atmosphere overall, Bada and coworkers believe that it may well mimic the complex chemical conditions near volcanic sites.

The study ’demonstrates how the addition of hydrogen sulphide may have been important in producing a richer assortment of key building block such as amino acids,’ says Bada. ’It seems increasingly apparent that volcanic plume chemistry may have played an important role in the synthesis of organic compounds on the early Earth.’

Bemused by the new findings from old samples, biochemist Kevin Plaxco from the University of California at Santa Barbara comments: ’Miller was such a pioneer that even now, four years after his death and more than 50 years after the experiments in question, his work is still yielding surprises.’