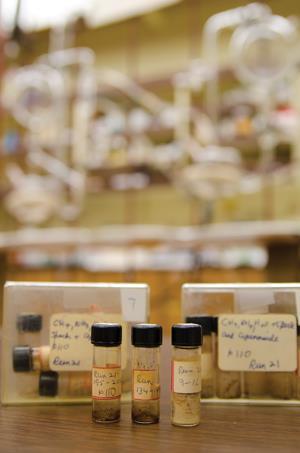 Stanley Miller was catapulted to instant fame in 1953 by his experiments indicating how the first amino acids could have been produced on Earth, thereby surmounting a major step towards the genesis of life. One question that remained open, however, is how these amino acids polymerised into the first proteins. Now, after analysing samples from a forgotten 1958 Miller experiment, a former student believes that, unbeknown to Miller, a possible answer may have lain undiscovered for over 50 years.

In 1953, Miller combined gaseous methane, ammonia, water and hydrogen in a specially designed reaction vessel and left them for a week, subjecting the material to continual sparks to simulate lightning. When analysed, the mixture contained several amino acids. In 1958, trying to explain how amino acids could condense into proteins, he repeated the reaction, this time adding cyanamide, a condensing reagent used to produce pharmaceuticals.

In 1958, no one had formally proposed that cyanamide was present in the early atmosphere. So why did Miller add it? In the early 1950s, he had been based at Columbia University in the US. ‘In that environment there was an intense amount of work by various people on how to synthesise peptides and proteins to make the first artificial protein,’ says Jeffrey Bada, a former doctoral student of Miller’s at the University of California, San Diego, ‘and that was actually done in those labs.’ Bada suspects that, during a seminar or ‘over a beer or something’ someone may have suggested that cyanamide could have been present on the early Earth.

Strangely, despite documenting the experiments and retaining samples, Miller never analysed them. In the late 1960s, other researchers proposed that ultraviolet light could have stimulated methane to react with ammonia in the proto-atmosphere, producing cyanamide. Even then, however, Miller’s experiments were not repeated because cyanamide only catalyses amino acid condensation effectively in a mildly acidic environment, while conditions on the early Earth were thought to be neutral or alkaline.

In 1999, after Miller suffered a severe stroke, Bada inherited the samples. Together with colleagues at UCSD and the Georgia Institute of Technology in Atlanta, Bada analysed the samples, identifying 12 amino acids and 10 dipeptides.

The total yield of dipeptides and their cyclic forms, diketopiperazines, was about 10%, but Bada argues that, even in small amounts, such chemicals could have done the trick. ‘Some of the simple dipeptides and their cyclic forms (diketopiperazines) that we have identified have been shown to be effective catalysts at low concentrations of a variety of reactions,’ he says. ‘These could have therefore helped to facilitate the formation of more complex molecules that lead to the first type of simple nucleic acid-based self-replicating entities, and thus the origin of life.’

‘This resurrection of Stanley Miller’s experiment significantly expands the set of environmental conditions that have been found to support peptide synthesis,’ says Irene Chen of the University of California, Santa Barbara in the US. ‘It is possible that the same mechanism that produced peptides in this experiment could be enhanced under different conditions to produce greater yields.’