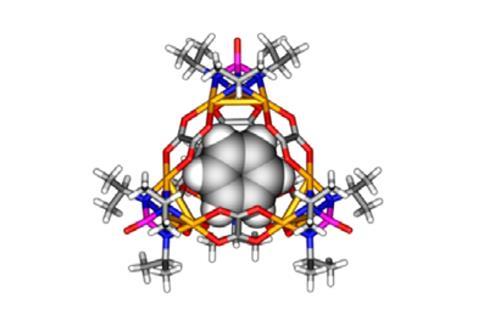 Flat images in PDFs where bonding is obscured, such as this benzene held in a molecular cage, could become a thing of the past as they can now be easily turned into interactive 3D structures. (See the PDF at the bottom of the page for an interactive version of this image.)

PDFs are finally entering the digital age for the chemical sciences with static, 2D chemical structures being given a major upgrade.

Fed up with the limited information 2D figures can convey about complex molecular structures, a team led by Kerry Gilmore at the Max Planck Institute of Colloids and Interfaces in Germany and Nabyl Merbouh at Simon Fraser University in Canada has developed interactive 3D images that can be easily embedded into PDFs.

Their illustrations can be rotated, zoomed in on and manipulated in an ordinary PDF opened with Adobe reader. The researchers published their own manuscript featuring several examples on the preprint server ChemRxiv, which shows how structures be easily viewed at any angle, giving – for example – a better sense of the shape of an enzyme’s active site, or what a twisted molecule looks like in 3D space. The team points out that it is a more space-efficient way to convey chemical information, as it removes the need to produce several figures to represent a structure. (A selection of interactive 3D chemical structures can be road-tested in the sample pdf below.)

The team note that the process of making these figures is straightforward, and can be constructed from a range of file formats including SMILES, .pdb and .cif. The researchers have published video tutorials alongside the paper to help others to create their own interactive 3D structures.

Thanks to their efforts, the days of squinting at molecular structures squeezed into an impossibly small space may soon be over.