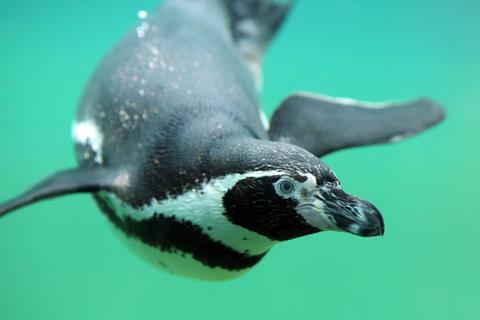 The structural features that prevent ice forming on penguins’ feathers have been copied to make an ice-resistant polymer surface. The team behind the work says the surface could help to design new freeze-resistant coatings, and might one day lead to a coating to protect ships and aeroplanes from deadly ice storms.

In recent years much effort has gone into developing superhydrophobic surfaces that repel water, using ridges or bumps to create unevenness that prevents water settling. But at low temperatures, these are vulnerable to becoming coated with ice if ice crystals form in the gaps between ridges, or water droplets coalesce and freeze.

Some hydrophobic surfaces take their designs from nature, such as the leaves of slippery plants or the namib desert beetle, and in this case researchers turned to penguins – who can walk and swim in sub-zero temperatures without their feathers frosting over – for inspiration.

They collected some shed Humboldt penguin feathers from a zoo in Beijing and looked at them under a scanning electron microscope. They identified several air-trapping structures including nanoscale ridges and interlocking hooks on the barbs of the feathers that would create the characteristic rough surface needed for superhydrophobicity. When they sprayed them with supercooled water microdroplets they found that as well as being very good at repelling water, the feathers stopped ice forming. ‘We believe that the nano-grooves on the feather and the microscale distances between the adjacent feathers are crucial to the icephobicity,’ says team member Jingming Wang from Beihang University. The group observed that neither water droplets nor ice crystals were able to stick to the feathers well. 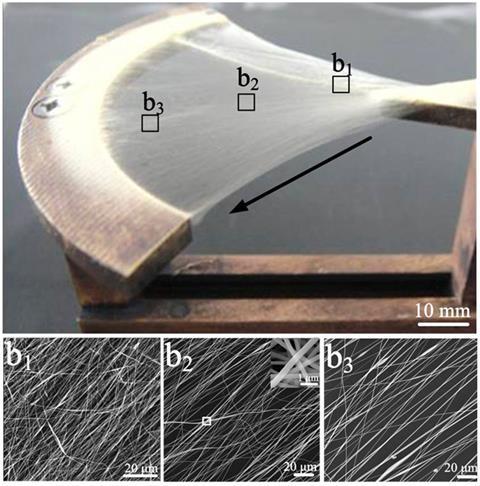 Under the microscope, the polyimide replica feather (top) has a radial density distribution (bottom) similar to a real penguin

The next step was to try and replicate these ice-resistant properties on an artificial surface. The team used high pressure electrospinning to build a fan-shaped replica ‘feather’ using very thin polyimide fibres. ‘The structure of the penguin feather is too complicated to replicate completely,’ says Wang. ‘We chose to focus on the main structure of the nanoscale fibres and the microscale distances [between them].’

When they carried out similar tests on the polyimide surface, they found that it was less icephobic than actual feathers. But the icephobicity could be altered by adjusting the spacing between the fibres. ‘If the distance between the air-infused nanostructures is high enough, the adhesion force between the ice and ice-resistant surfaces can be reduced, [and] the replica achieves good icephobicity,’ says Wang. When the spaces between the fibres were greater than the diameter of the droplets the surface could be sprayed with supercooled water at -5°C for hours without any ice forming.

The team hope their observations could be useful for designing new materials that are resistant to ice, such as the insulators used for electric cables.

Neil Shirtcliffe, who works on superhydrophobic surfaces at Rhine-Waal University of Applied Sciences in Germany says the findings are interesting because there has been ‘surprisingly little’ work on penguin feathers and ice. ‘The conclusions seem to agree with many others, that ice-resistant surfaces can be produced using roughness, but that more is needed than for superhydrophobicity,’ he comments. ‘We have many ways of producing and arranging polymer fibres, so this could help reduce the cost of ice-resistant coatings,’ he says, adding that the feather-inspired design would probably have to be further optimised, as ‘penguins have different environmental demands than a typical icing storm that might hit an aeroplane or bridge’.